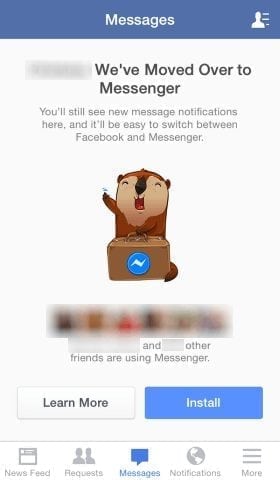 Private messaging wasn’t really an important Facebook feature until a couple of years ago when, generally speaking, people finally realized it is just better to message someone personally instead of publicly posting on their wall / timeline. It is around that time when Facebook launched ‘Messenger’ – a separate app just for sending and receiving Facebook messages to and from your Facebook friends.

Messenger remained a separate, independent app for a long time. It was largely useless, actually, since the main app came with a ‘Chat Heads’ that allowed you to message friends while browsing Facebook while Messenger was single-purpose. It was just a few months ago when Facebook completely redesigned Messenger that it became a useful application. I personally have been using it since, and have no issues with it other than the annoying amount of time it takes to go from Facebook’s main app to Messenger on receiving a new message.

User backlash against Messenger is based on inaccurate news

Last week, Facebook made it mandatory for all mobile users to install Messenger, resulting in a huge backlash from irritated users who have retaliated by leaving 1-star reviews on App Store and Google Play. This has more to do with the inaccurate news spreading online stating about Messenger being able to perform tasks like sending messages, making calls, and taking your photos without notifying the user. The fact of the matter is, Facebook Messenger and other multi-faceted messaging apps have always asked for these system-level ‘permissions’, and have legitimate uses for them that do not involve state surveillance a la 1984 (sci-fi novel by George Orwell).

As always the case when Facebook makes sudden, user-experience-changing decisions for all users, we expect this ‘huge backlash’ to die down in a few days.

We strongly recommend you use Facebook Messenger for sending and receiving messages. There is no harm or any new invasion of privacy over the main Facebook app.

Of course, you have the freedom to do as you please in case which we suggest the simple alternative: use your web browser. All Android and iOS devices come with Google Chrome and Mobile Safari (respectively). Simply go to www.facebook.com, sign in, and tap on the Messages icon at the top to read new messages, or reply to them.

This is a highly inconvenient method of accessing your Facebook inbox. Honestly, if you are repelled by Facebook’s wide-ranging usage of personal data (that you provide yourself) for delivering targeted ads, delete your account and use something like WhatsApp or Kik to stay in touch with friends. You are not doing yourself any good by avoiding Messenger.