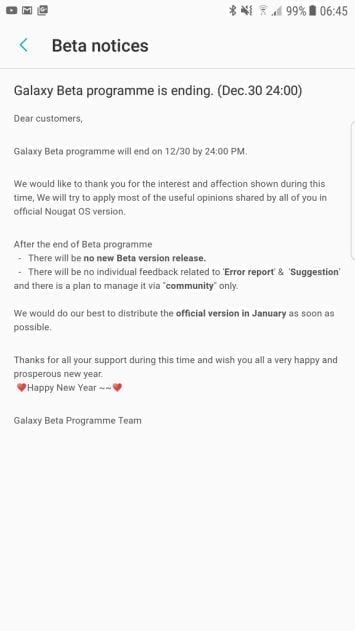 With the end of the year behind us now, Samsung delivered some bad news. The Nougat open beta will come to an end on 30th of December, on the Samsung S7  and the S7 edge. But don’t have a heavy heart just yet. The South Korean multinational conglomerate company also announced the release of the stable firmware for the aforementioned devices. After the program ends, no further updates will be deployed.

Samsung introduced the Galaxy Beta Program in the second week of November. The program had a total of five updates. It gave Galaxy S7 and Galaxy S7 edge users in the market the option to beta test the upcoming Android Nougat update.

The Android Nougat betas have received overall mixed feedback. With users reporting a solid user experience. However, a few major issues have also been reported with the firmware.

Samsung messaged the beta testers details of the release of the stable OS. They also wished them a happy new year.

Samsung’s Message To The Users:

“We would like to thank you for your interest and affection shown during this time, We will try to apply the most of useful opinions shared by all of you official Nougat version.

After the end of beta program

We would do our best to distribute the official version in January as soon as possible.

Thanks for all your support during this time and wish you all a very happy and prosperous year.”

According to Samsung, the version of Nougat that will be rolled out is Android 7.1.1.  However, some users will get Android 7.0 first, but they will be upgraded to the aforementioned version later down the road.