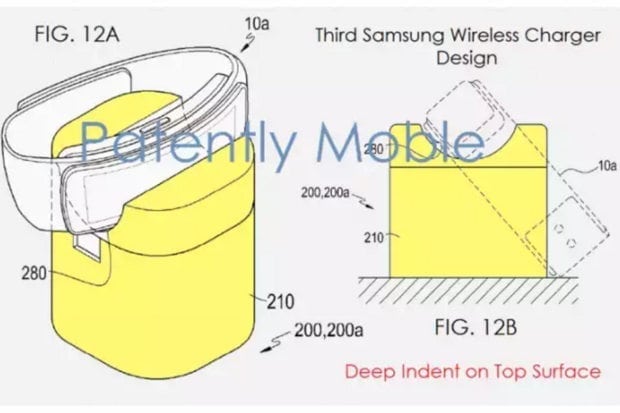 Samsung has filed a new patent which suggests that it is working on developing new wireless charger designs. The company already provides wireless chargers for its existing phones. The flagship smartphones Samsung Galaxy S6 and Galaxy S6 edge can both be charged from wireless chargers. Samsung also offers a Wireless Charging Pad to charge mobile devices.

Samsung says “With this stylish accessory, you can charge your compatible Galaxy smartphones, and other Qi-compatible devices, without the need to plug your device into a wall charger or USB port. Simply place your device directly onto the charging pad and your phone begins to charge.”

The patent filed suggests that Samsung is working to develop three new wireless charger designs. The current wireless charging pad is flat while the patent suggests taller pads. According to the new patent, this wireless charger will not only charge smartphones but also smartwatches.  Moreover, it will also be able to charge tablets, cameras, electronic glasses, and other wearable devices. The charging pad will be able to charge smartphones and smartwatches, simultaneously.

Goldstein Patent Law mentions that it goes without saying that tech companies file many patents around the year but only a few of them are implemented. So, for now, we can’t be sure if these three designs will surface or not.

Enhance Your Smartphone With The Latest Gadgets