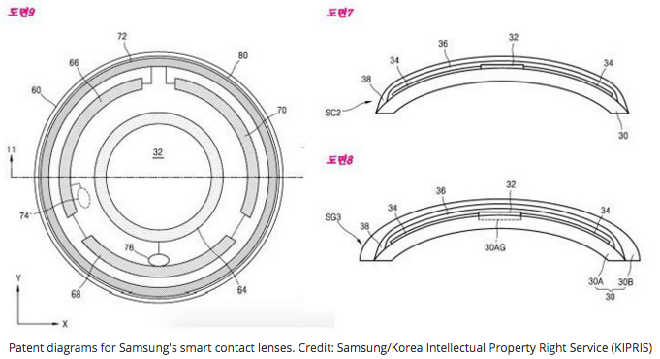 Today we got news that Samsung, the South Korean technology company just got smart contact lenses patented. This type of smart lens will now have a built-in camera as well as sensors. These sensors will be controlled through blinking. The patent was filed with the South Korean authorities in 2014, however, it was approved only last week by the Intellectual Property Office of South Korea. the patent is almost 29 pages long and it was published by an Intellectual Property Rights Informative Service based in Korea.

As of now Samsung and Google are both the only two companies who hold the patent on these lenses. For Google, the interest in this technology is mainly medical as the company is working on developing sensors in the lenses to measure the blood sugar level of a person through their tears. Samsung will, however, work on introducing antennas into the lenses in order to transmit data to a person’s smartphone. Through their new patented technology, Samsung is hoping to break into the market of Google Glass so that the image quality can be improved. The lens will sport a camera, an antenna and some sensors.  Google Glass already lets it’s users take pictures with a wink. There has been a lot of focus on technology related to LCD displays as Ghent University in 2012 also manufactured contact lenses which will enable people to read their texts projected on their eyeballs.

Even though Samsung has been granted the patent perhaps this patent might not turn into anything concrete.

Another recent patent that was recently filed by Samsung back in February implied that the company might soon start working on using a person’s veins to identify them.

We can tell you one thing right now, we are extremely excited about the possibilities that have been opened by this technology. Soon people will have ‘Supervision’ and that will get us one more step closer to the future.