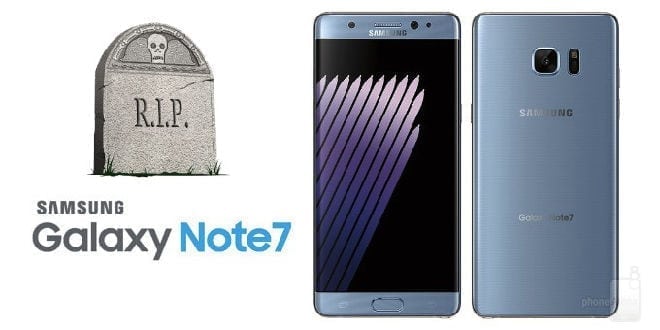 The past couple of months has not been pretty for the group at Samsung and even worse for developers of the Samsung Galaxy Note 7. Between having to return their brand new Note phablet, wait for a replacement device, and then have to return that replacement device, Note 7 users have not had a very good time lately. Well, all that now comes to an end.

Samsung has officially killed the Galaxy Note 7. Yes, you heard that right. After halting production of the phone on Monday, the company has decided to outright kill the device.  With a recall of over 2.5 million devices early last month, Samsung announced early Tuesday that they will no longer produce Galaxy Note 7 units. Unfortunately, this still means that those who still have the smartphone need to return it to their carrier or to Samsung itself.

This drastic action did not go lightly for the electronics company as their shares fell by about 8% in a single day meaning they lost an outstanding $17 billion in market value. They are now forced to depend on the Galaxy S7 smartphone to keep their share in the smartphone industry. For now, it is safe to say that Samsung is quickly trying to get ready for their next flagship device, possibly called the S8. Let’s just hope that this one doesn’t explode as well. Samsung apologized to various business partners who used the Note 7 devices for their services. Some carriers worldwide gave refunds to customers of the device or allowed them to switch to another device. Many of these customers who had this chance switched to the Galaxy S7. Others were simply done with Samsung and decided to try out the iPhone 7 or 7 Plus.

For those who still own the Note 7, it is urgent that you stop using the phone. Simply power it down and send it immediately to your carrier.