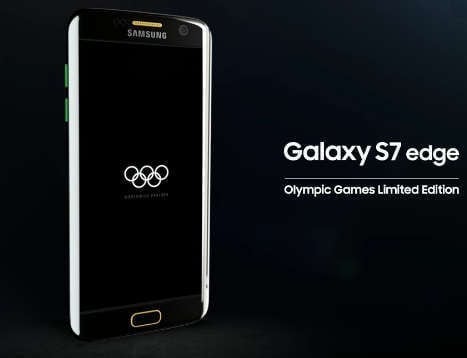 Before Rio Olympics 2016 Samsung promised to give away free Galaxy S7 edge Olympic Games Limited Edition smartphones to athletes. The company has fulfilled its promise and is giving away the special edition phones to athletes participating in the event.

Every athlete participating in the Olympics will receive one of the 12500 Galaxy S7 edge Olympic Games Limited Edition smartphones. This will help Olympians communicate with their families and capture memories with their latest Samsung smartphone.

At an event in Sao Paulo, Brazil the limited edition phone was the star of the night. Samsung also launched an official app to celebrate the start of the Rio Olympics global campaign.

The smartphone is the first ever phone to have the Olympics games design imprinted on it. Moreover, the five colors of Olympics ring are also present in the colorway pattern of the limited edition phone. The colors of the rings are used to light up the screen and the home screen, alongside the notification bar, dial, contact and message screens. Another special feature of the phone is the enthusiasm, fair play, and competitive spirit themed wallpapers.

Not only this, the special edition phone comes with new accessories. Gear IconX wireless headphones are available to make the fitness experience for Olympians even more exciting. The Gear IconX has its ow music player and in-ear heart rate tracker.

Executive Vice President of Global Marketing Younghee Lee said that Samsung has utmost respect for all Olympians. He further added sports are helping people challenge themselves and free themselves from the gravitational pull of complacency.

Thomas Bach President of International Olympic Committee (IOC) also thanked Samsung for their support of the Olympic Games. He said “The IOC is grateful for [Samsung’s] partnership,” when the company announced the limited edition phones.

Samsung also released 2,016 custom phones for users.  Users who want to buy the Limited edition phones can buy the handsets online for $849.99.

Check out this video: