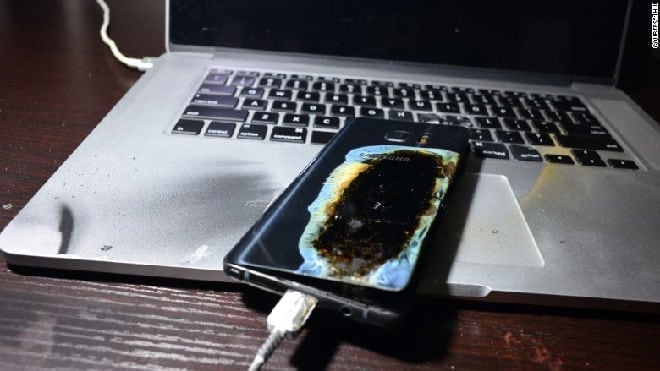 Since the release of the infamous Samsung Note7, it has been secluded in a cloud of controversy. While the Korean based company is working hard to put water on flames of its product incidents keep on surfacing. Which is indeed the darkest nightmare of any PR department.

According to the report a SAFE declared Note7, bought over the weekend in China, burst into flames and injured the owner. Bloomberg Quint spoke to the victim. Hui Renjie a Chinese 25-year-old man, who had a Note7 delivered from an online retailer over the weekend. But according to Renjie, the device exploded on Monday morning, damaging his MacBook and burning two of his fingers.

Reportedly Renjie’s smartphone emitted black smoke after he left it connected to the charger overnight. The device eventually burst into flames.

“The incident caused minor injuries to two of his fingers and burned his Apple Inc. MacBook,” reports Bloomberg.

“A Samsung representative visited him soon afterwards and asked to take away the phone, he said, but he declined the offer because he doesn’t trust the company to reveal the reason for the fire, and plans to publicize the issue” Bloomberg Quit writes.

In response to Renjie’s concern, Samsung told Bloomberg via email. That the company is in the process of communicating with the faulty device’s victim. And that it is planing to conduct a “thorough examination” of the Galaxy Note7 that exploded. That is if Renjie decides to hands it over.

Experts are still unsure as what would cause such a travesty. Whatever the reason or cause. It doesn’t look good for Samsung. They have already lost not only money but also customer fan base and trust in first wave of these blasts. Experts believe that they can’t afford to suffer any more such loses. But if this trend continues, second wave of official recall of the phone is imminent.