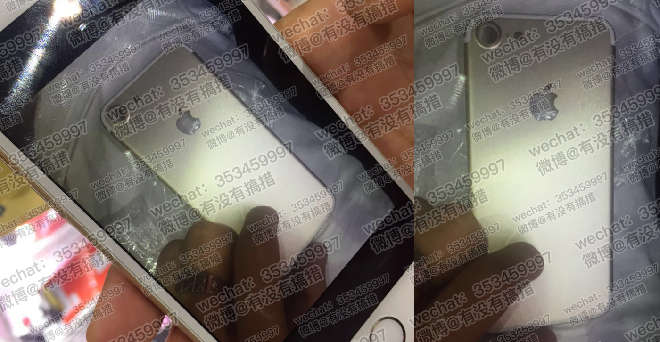 A lot has been written about Apple’s product cycle in general, with many worrying over whether Apple will pack big, monumental changes into the iPhone 7 or whether the device will be a smaller, incremental upgrade over the iPhone 6s.

According to a new so-called ‘spy shot’ of the iPhone 7’s back casing, the next-gen 4.7-inch iPhone (not the Plus) comes with a bigger camera port that will house a larger CMOS sensor. For months, the rumor mill has focused on the iPhone 7 ditching the 3.5mm headphone jack. But the reason Apple may be removing the ugly antenna lines that run horizontally on the back may be related to big camera improvements.

The leaked shot posted to Weibo by Chinese repair shop Rock Fix purportedly shows the 4.7-inch iPhone 7’s back casing complete with a caption that speculates about a ‘large size’ CMOS sensor. It can be seen where they got that impression given the size of the camera hole on the back.

The purported images validate many earlier rumors and reports on the cleaner antenna lines and the dual rear camera setup that will reportedly be exclusive to the iPhone 7 Plus. If authentic, the rear camera on the regular iPhone 7 will have a larger rear camera. A larger cutout could also mean any number of changes are coming. A bigger camera sensor for better low-light performance? Optical image stabilization? (OIS is currently only in the larger iPhone 6 and 6S Plus.) More megapixels? Dual-phase auto-focusing like on the Samsung Galaxy S7. We don’t know for sure.

Former rumors indicate the iPhone 7 will be both waterproof and dust proof, and use either Intel or Qualcomm modems depending on the carrier. We still don’t know if Apple is formally ditching a physical home button on the iPhone 7, or whether the home button might fold into a larger, full-device display on the iPhone 8.

We will keep you posted on any new developments we learn.