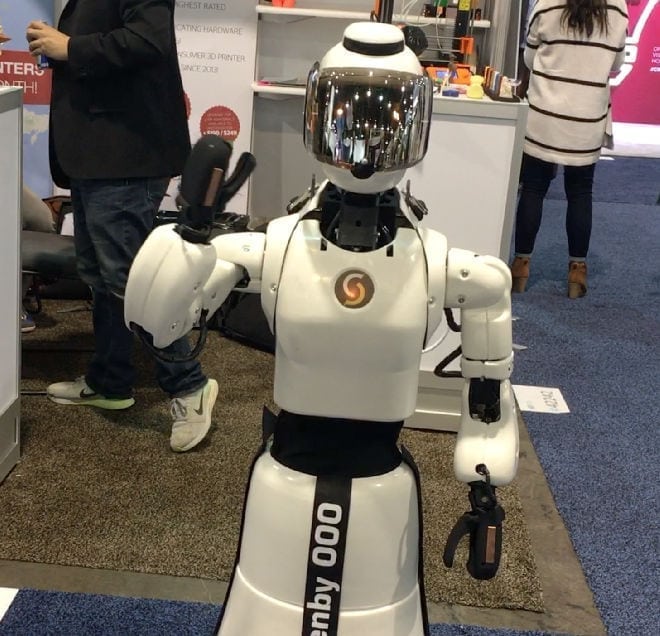 Robots were everywhere at CES 2017. In the real world, Robots have been with us in industry for decades where they are programmed to do a specific task, like an assembly or painting an auto body. The examples I saw at CES are a testament to just how far we have come with robot tech. They were much more personable and sophisticated. They had personalities. Pepper, Leenby, SandBot are just a few of the robots we saw.

There are those designed to entertain us as well as educate and inform us. Cute little guys to play with the children. Platforms to learn to code so you can test your code on a robot. There were robots that performed double duty as security sentries and robots that vacuum or wash your floors. I even saw a demo of one that folded laundry.

Leenby is the 5th generation mobile robot from the French developer Cybedroid. It is very much a robot but I must admit it had a humanoid almost empathic way about it. Designed for personal assistance, social companionship, education and commercial purposes. Originally intended to address the needs of the elderly and handicap, either at home or in a medical environment. Some of the tasks it can perform in this role are assisting one back to their room, delivering food and beverages, detecting a person in immediate danger and formulation the right solution.

This robot is equipped with speech recognition and synthesis. This enables it to interact with an individual based on keywords. It is made to function autonomously, but it can connect to various networks (local Ethernet, Bluetooth, Wifi, mobile 4G).  Thanks to two lidar sensors and a stereo vision camera system, Leenby is able to map its environment and recognize objects.

Lynx is like having an Alexa with arms and legs.  Personal assistance and entertainment are the focus.  Lynx can detect and recognize emotions, objects, images and voices.  There is a surveillance mode and music mode.  It will manage tasks and more.

Robots are beginning to make it into the public sector. One company, QIHAN has an open API robot known as SanBot that is programmed for various applications. QIHAN uses a three prong approach with SanBot that includes the robot, the cloud server and the app which you can use to control SanBot.

Programmed for the home, SanBot can serve as your personal assistant.  It can serve as the hub for you SmartHome.  When away from home you can see what it sees with its cameras and control it remotely using the app.

SanBot can serve as a security guard. For example, in a museum, it can detect if anything has been moved after hours and if so, it will sound an alarm.

This robot can assist customers in a retail environment and in the hospitality industry. SanBot is totally adaptable to the healthcare industry.  These mechanized wonders can serve as companions for the elderly as well.

In education, SanBot serves as a teacher’s assistant. It has a built-in HD screen and a Laser Projector to play or stream content. It interacts with children in a classroom environment.

SanBot assists customers in the hospitality industry and serves as 24/7 receptionists.

Customs at Gongbei connecting with Macau sees 1.2 billion travelers per year. Using facial recognition it can do security screenings for individuals who may pose a risk. It can provide customer services like answer customer questions and it can entertain passengers with movies and music. Sanbot can provide translation services at International Airports.

SandBot can do facial recognition, gesture recognition, and voice interaction.  It knows when its power is running low and go’s to its charging station to replenish its power on its own.  SanBot will run for 10 hours on a single charge.

“According to a study conducted by the International Federation of Robotics (IFR), by 2025, service robots should represent 80% of the global market. In 2015, about 5.4 million service robots were sold for personal and domestic use, which was a 16% increase over 2014. It is estimated that 42 million units will be sold globally between 2016 and 2019. • Analysts predict that by 2018, the specific market for robot companions/assistants/humanoids will start to flourish. Japanese, American, Korean and European companies are in the process of developing these general-purpose robot assistants that push beyond the limits of toy and leisure markets.”

We will most likely begin seeing more sophisticated robo-tech in public places like airports, shopping malls, and other venues.

Some might be thinking, is this the very beginning of Terminator? I don’t think so, but we are certainly on the cusp of a new era.

Check out this video of some of the Robots we saw at CES 2017.