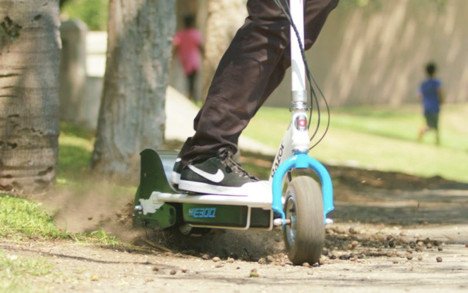 Have you just bought an electric scooter for your kid? These e-rides are all the rage these days and it’s not surprising why. They are convenient, fun, and sort of therapeutic, too!

Just like with any vehicle though, navigating rugged roads can be dangerous with an e-scooter. Therefore, it is important to walk your kid through the rules of safe riding before you let him head off to his first scooter adventure. This way, you can keep him out of harm’s way and ensure that he gets to his destination safe and sound. In this post from Scott, take a look at the following guidelines your kid should abide by when riding an electric scooter for kids:

Equip him with a helmet

Did you know that riding low-powered cycles such as electric scooters requires the use of helmets, too? Well, it’s not really a legal requirement for adults, but in most places, it’s illegal for young e-scooter riders to scoot along without wearing this safety gear. Let’s face it: when your kid hits the road, the possibility of a collision is always there and the easiest way to make sure his head and neck are safe from injury when this occurs is by making sure his head is protected by a helmet. Consider this a non-negotiable!

Sure, we get it—speed is the most exciting thing about electric scooters. But just because the e-scooter you bought for your kid can run at incredible speeds doesn’t mean it should be at the maximum all the time! Just as how it is for bigger vehicles, going too fast with an electric scooter could steer your kid out of control. So before he starts his first ride, make sure to test his judgment when evaluating speeds and let him start slow so he can get used to pressing on the brake when necessary. Starting slow will also teach him proper balance when riding his new toy. You know, it’s not hard to figure out how to run electric scooters for kids, but it still takes some getting used to before a kid ever becomes ready to go full throttle.

Buddying up with his friend on his new electric scooter may sound like a great idea for your kid, but that’s a big no-no. Like we said, electric scooters for kids have weight limits. Even if their total weight comes way below his E-scooters limit, doubling up will only make it hard for him to balance and steer. Yes, it may be fun for your kid to have someone else hop on, but that’s too dangerous to even try. If he wants to share the joy of zipping around your village with his friends, just set a time limit so each of them can take turns riding his scooter solo—but tell them never ever to double up!

Never let him use his phone

Don’t let your child think that riding an electric scooter is far from driving a car. Instead, teach him that steering his e-ride requires the same level of concentration as driving a car! Electric scooters for kids may not go as fast as family cars but focusing on steering while speeding along is just as important when riding an e-scooter as it is when driving. As a responsible adult, you know what distracts adults most when driving—cellphones. And you know for sure how it only takes a split second for an accident to happen! So before you let your kid hop onto his new scooter, teach him that “eyes on the road” is the number one rule in safe riding, which means he should always have both his eyes straight ahead and his hands on his handlebars. If he needs to check his phone or want to take a selfie, tell him to find a good stopping point before he pulls out his phone. Taking a selfie and texting a friend are things he shouldn’t do when in motion.

While electric scooters for kids are generally considered toys, it’s imperative to let your kid go over these rules before he heads off to his first ride. When he knows what he’s allowed and not allowed to do, you have peace of mind knowing he’s safe on the road even when you don’t see him.

Buying an Electric Scooter for Kids? Here’s What You Need to Know