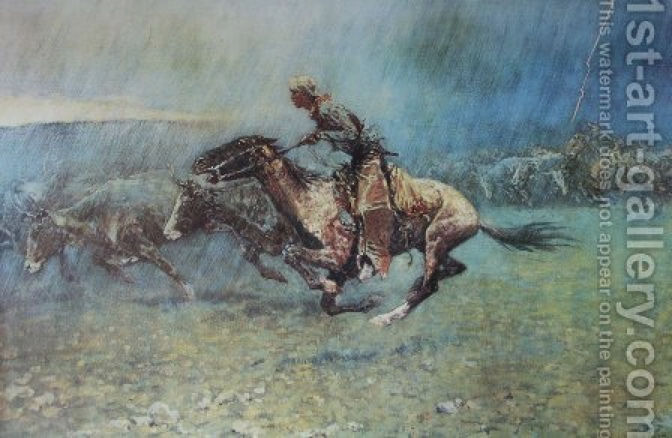 “You use a glass mirror to see your face; You use works of art to see your soul.” as said by George Bernard Shaw, the late Irish playwright, and political activist.

Art, being the fountain-head of displaying the emotions and wonders of the soul in very inventive means is quite extensive in nature. Talking specifically regarding western art, it is a winsome and most meaningful kind of art, as, unlike others, it solely focuses on one faith and developing accuracy.

Frederic Remington is one of the foremost standard artists who contributed to the development of western art by depicting the American Old West. His mastery of paintings, illustrations, sculptures, and writings has always been the affair of compliments and made the aura of western art even more worthwhile. Thus, for everyone who is in awe of modern artwork, here is everything to know about Remington- a western-style painting master.

Frederick Sackrider Remington, who was born in October 1861 and left the world on December 26, 1909, is a big name in the world of creativity and known for laying the cornerstone for western art. From the end of the 19th century to the beginning of the 20th century, he made his image as the most remarkable illustrator in the ‘Golden age’.

His dynamic work from the 19th century comprises representations of cowboys, American Indians, bronco busters, braves, and cavalrymen. This is how he developed a fantasy image for western America that still inspires the nation to great extent. Besides, the fact that he showcased the spirits of action and drama in his iconic artwork made him a role model for the next and new generation of writers, painters, and artists.

Throughout his journey as an artist, Remington managed to create more than three thousand paintings and twenty-two bronze sculptures. In addition, his one novel, hundred of articles and stories, and a broadway play also proved his upper hand in creativity. What’s more is, his ability to strike realism and delineate individualism, independence, and stoic heroism that head towards an optimistic America.

Remington, who played a lion’s share in shaping the culture of America is a shining example among modern artists. Even though he developed a huge number of artworks, there are a few that directly strike viewers’ hearts for their uniqueness in meaning and colors. Below-mentioned is some of the most remarkable Frederic Remington oil paintings. 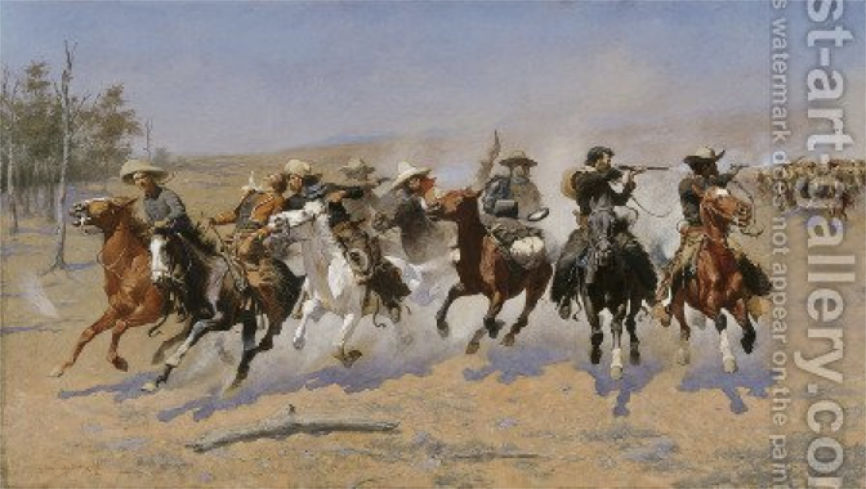 A Dash For The Timber is the most commendable and largest work by Remington. It is an oil painting that depicts the group of eight cowboys and pack horses who are in full swing to pursue a war party of Indians. The blue sky and purple shadows make this piece close to reality in the eyes of viewers.

The action-oriented expression of cowboys and dust scattered all around gives this iconic figure, a cinematic expression to woo the audience. It completely breaks the typical Indian stereotypes while leading to the blossom of western culture. 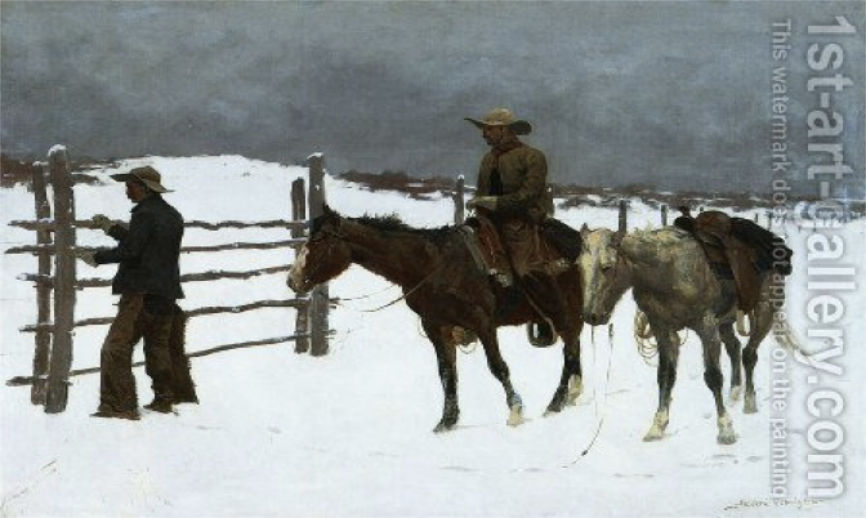 The Fall of The Cowboy is a precise reproduction by Remington in 1895. Through this oil painting, he mourned the passing of the cowboy with slow rhythms and somber tones. It accurately displays the emotions and acts of heroic and tragic people

Being the reflection of life, this artwork has been published in the most famous article, ‘The Evolution of the Cow-Puncher’ by Remington’s friend, Wister. It was also further had to be immortalized in Wister’s impactful novel, ‘The Virginian’. In addition, just like his other artwork, ‘The Fall Of The Cowboy’ became one of the major reasons for shaping the culture of America and taking it onto the path of modernization. 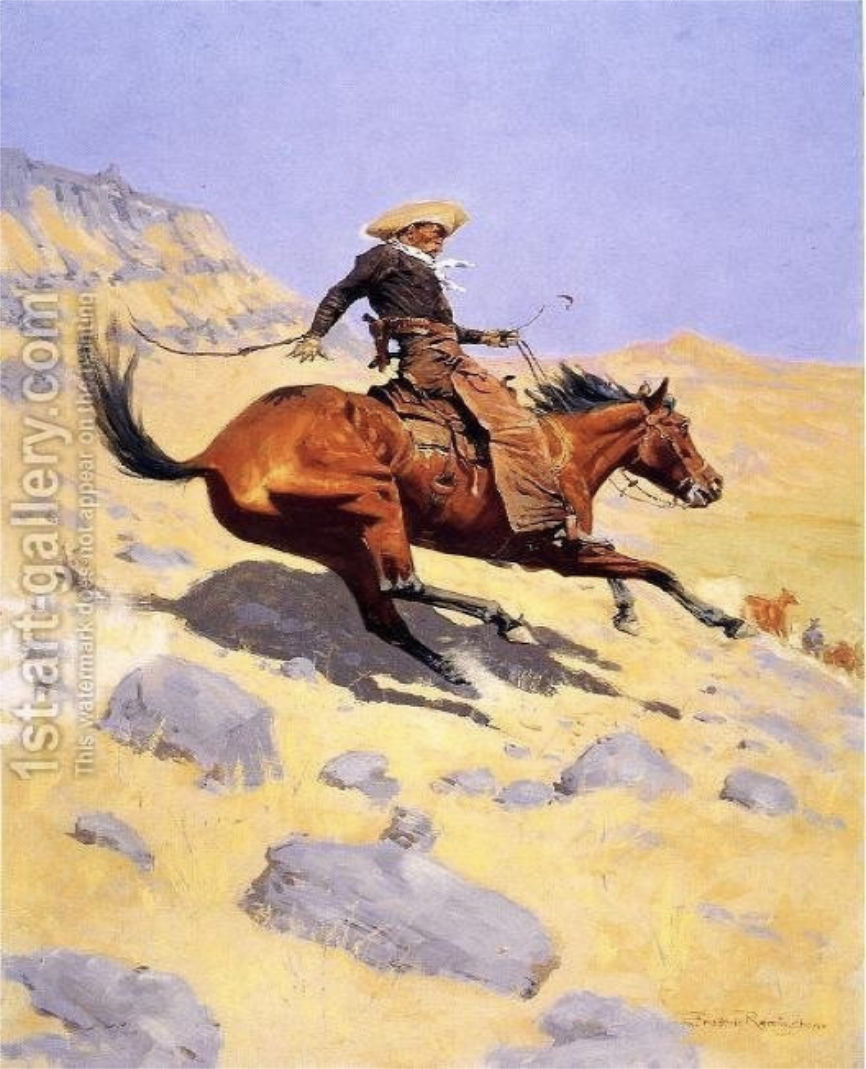 The Cowboy painted in 1902, is another iconic work by Remington that portrays the myth in the form of drama and movement. It was the roughriders of the American West who inspired him to head towards a cinematic visual to let the audience have a grasp of the legendary acts of cowboys.

The artwork was later called as the prime example of Remington embedding himself firmly with the help of intriguing effect. The oil painting gained huge recognition and honor, and also became the template for the cinema of the western genre. The fact that it exercised its control three years after the death of Remington makes it one of the best pieces out of all oil painting reproductions.

Western art, unlike others, is a particular form of art developed on the basis of the artists’ capacity to influence through his passion. All thanks to Frederic Remington who laid the foundation of modernization through his plethora of artwork while breaking all the typical stereotypes.

Showcasing the reality and essence of heroism, Remington’s pieces of art and craft are no less than any source of inspiration among the new generation. Probably, this is why the audience loves to view and own such kind of art for a lifetime of self-motivation. Thus, wait no more and make his artwork a part of your life to embrace positive change.

History of Art in Australia