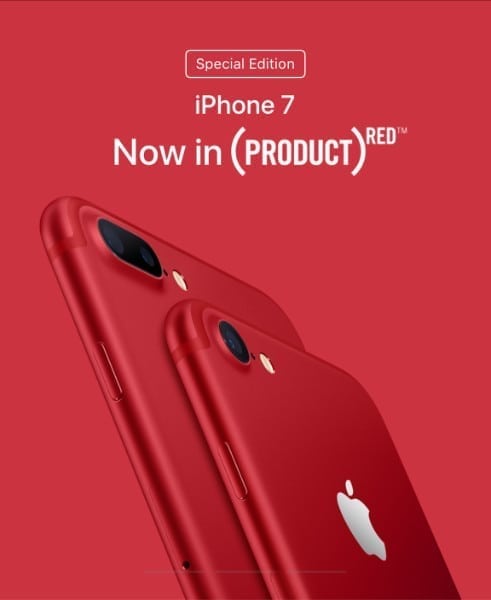 Rumors of a red iPhone 7 and 7 Plus have been circulating the internet for quite some time now. Everything ApplePro was actually one of the first to make the prediction that Apple would soon release an iPhone in the red color. (Product) RED teamed up with Apple to create an all new red iPhone 7 and 7 Plus. Apple posted the new design to their website early in the morning on March 21, 2017. Fans and lovers of the color red freaked out over the new color change. It features a matte red back and glossy silver Apple logo. One similar to that of the Jet Black iPhone 7 and 7 Plus. The front features a white bezel and a matching Home button with Touch ID integrated into it.

(Product) RED may be familiar to Apple fans as it has worked with the tech giant before on other products such as the iPod and Beats headphones but never before on an iPhone. A portion of the profits goes to “the Global Fund to support HIV/AIDS programs and help deliver an AIDS-free generation.”

A Colorful Future For iPhone?

It is expected as well that the iPhone 8 (or X or 7S), which will hopefully be announced this September, will feature the same (Product) RED color option as the iPhone 7 and 7 Plus. Some are also hoping to see a rumored Jet White and/or Blue option (similar to that of the iPod Touch) with the new upcoming iPhone.