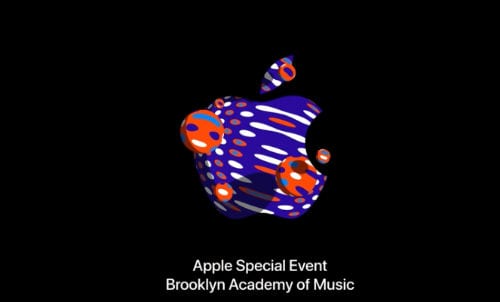 As with most Apple events, this show at the Brooklyn Academy of the Arts begins with an entertaining video. This opening video featured a funky music track behind the iconic Apple logo morphed into an array of artistic renderings of the Apple logo. The point was to emphasize Apple’s creative side that has been a major part of its legacy from the beginning. Segueing into a second video showcasing the diversity and excitement that is New York. “I happen to love New York”.

Tim Cook takes the stage and the crowd went wild. You can’t beat a New York audience for enthusiasm. With New York being known for its vibrant creative community it seemed fitting that an Apple event focused on creativity would be held there. Tim took time to praise the venue, the Brooklyn Academy of the Arts. A 150-year-old institution dedicated to the education and performance of the arts.

When Apple does a presentation in a creative community it makes sense that the Mac would be first on the agenda. The new software was also featured at this event but in this article, we are focusing on the new hardware announcements. We will discuss the software we saw in a subsequent article.

The Mac has been at the heart of digital creativity since its very beginning. Another artfully crafted video montage of black & white photos makes this point clear. What followed are the numbers related to Macs and customer satisfaction. Globally, the active Mac user base is at 100,000,000 Macs. A brief review of macOS Mohave followed.

The MacBook Air was the first remanufactured and reengineered Apple product presented, and the crowd went wild. The new MacBook Air has an edge-to-edge Retina display, measuring 13.3”. A resolution of 4 million pixels 48% more color. Touch ID has been added to the MacBook Air with the sensor built into the keyboard.

The keyboard has been upgraded with a butterfly mechanism. There are individual LEDs behind each key. A new 20% larger Force Touch trackpad has been added as well.

Improved audio like other recent Apple products is also in the new MacBook Air.  There is a 3 microphone array as well. 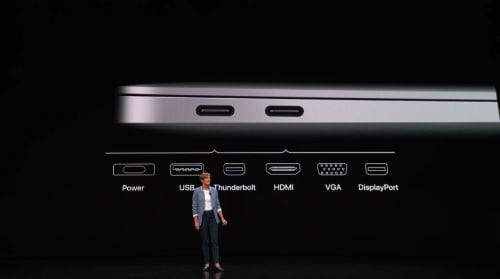 An 8th generation Intel dual-core i5 CPU with integrated graphics. You can add up to 16 GB of fast 2133 MHz memory. You can also add up to 1.5 TB of SSD storage. All-day battery life with 13 hours of video streaming time. The new MacBook Air also has a smaller footprint. This powerful laptop only weighs 2.75 pounds.

At last, a new Mac Mini with space gray finish.  Apple has beefed up this mighty midget with 4 core and 6 core processors and 60% faster graphics. It is 5X faster than the earlier Mac Mini. You can add up to 64 GB of memory. 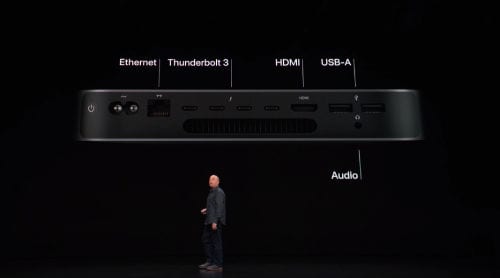 All Flash storage that is 4X faster with capacities up to 2 TB. The new Mac Mini also includes the new T2 security chip. Connectivity includes Ethernet and four Thunderbolt 3 ports, HDMI, 2 USB-A ports, and an audio port. The smallest configuration of the Mac Mini starts at $799 and will be available on November 7, 2018.

400,000,000 iPads have been sold to date. The new iPad Pro has a Liquid Retina display like the iPhone Xr. The 10.5” display on the current iPad Pro is now 11” on the new version. The new larger iPad Pro still has a 12.9” screen but its overall size is considerably smaller 25% less volume. 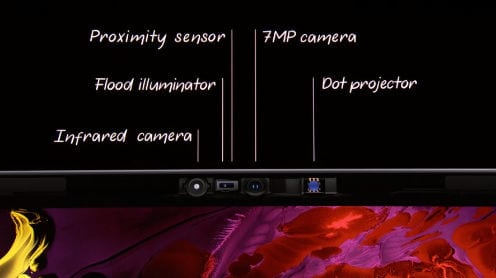 Face ID is now included so that means the new iPad Pro is equipped with the True Depth camera introduced with iPhone X. No Home button means all the Gestures in the iPhone X are now in the iPad Pro. Apple’s powerful A12X Bionic processor is also on board. Faster graphics with a 7 core GPU that is 1000X faster than before.

Apple’s Neural network engine that can deliver 5 trillion operations per second is also in there. You can now get up to 1 TB of Storage. The new iPad Pro outperforms over 90% of the computers sold in the past year. It’s a monster. High-performance USB-C replaces the lightning port and it supports charging. The second generation Apple Pencil is magnetic so it attaches to the iPad Pro and it automatically pairs and charges wirelessly so it is always connected and charged. You can double tap the pencil to change modes.

As usual, Apple did not disappoint. The level of performance in these reimagined products is incredible. Check them out at an Apple Store near you beginning November 7th.

More on this topic: An Apple Special Event – iPads, Macs, and More