It’s easy to use our devices every day and not give any thought to what it takes to produce such marvels.  Think about it, full-color displays that provide millions of colors. Screens that respond to the touch that keeps us connected via cellular, WiFi, Bluetooth.  With more computing power than most desktops and these devices fit into our pockets. When you break these devices down to the basic raw materials necessary to make this magic it becomes an interesting subject to explore. At the same time, be aware that these electronics should be recycled responsibly, not just thrown away once they outlive their usefulness.

To begin with, let’s take a look at the battery. The battery alone in your iPhone and other smart devices will consist of cobalt, graphite, and lithium. In a recent report from Bloomberg, Apple is trying to buy cobalt in bulk directly from the mines this raw material comes from. It would seem to be a cost reduction move that makes sense since the cost of cobalt has risen sharply in recent years.

The London Metals Exchange (LME) shows the price of Cobalt to be at an all-time high. It is currently in the neighborhood of $83,000 per ton. By comparison, the price of cobalt was around $20,000 per ton just a few years ago in 2013. Can Apple be making this move because of price or supply or both?  With the auto industry moving to electric cars and very large batteries cobalt and lithium are becoming coveted materials. So it appears Apple is now in direct competition with automakers for cobalt. Obtaining cobalt for batteries has been handled by battery manufactures but it appears Apple is making moves to ensure it has ample supply by purchasing directly from miners.

In a Bloomberg report, it was stated that…

“Apple is seeking contracts to secure several thousand metric tons of cobalt a year for five years or longer, according to one of the people, declining to be named as the discussions are confidential. Its first discussions on cobalt deals with miners were more than a year ago, and it may end up deciding not to go ahead with any deal, another person said.” 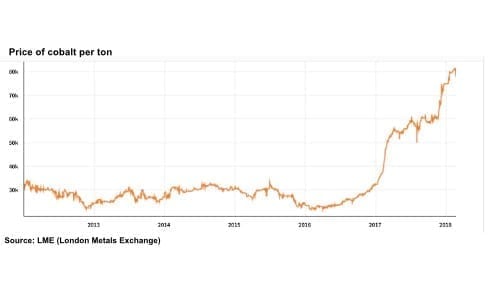 There are many more raw materials in the components that make our smart devices possible.

The processor in these devices are largely made of silicon but they also contain phosphorous, antimony, arsenic, boron, indium, and gallium.

The connections our devices make to the processor and elsewhere are made of gold, silver, copper, and tungsten.

The solder can have silver, tin, or copper.

Tantalum is used in the micro capacitors.

The magnets used in producing the sound we hear from these devices include the following. Neodymium, iron, boron, and in some cases small amounts of rare earth.

The magnets in the haptic engine contain the same materials as those used for sound reproduction but also praseodymium, dysprosium, boron, and iron.

Aluminum is used for the casing and other parts.

At one count there were 62 different metals used in the making of an iPhone. This number could fluctuate with new advances in technology.  So the next time you pick up your smart device, note that a good chunk of the periodic table is in your hand.