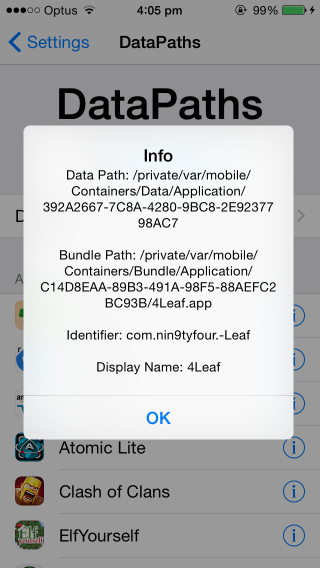 iFile previously allowed you to directly open any iOS app’s sandbox directory. iOS 8 restructured directories, so this no longer works. DataPaths allows you to directly find and open iOS app sandbox path in iFile with ease. Check it out after the title image! 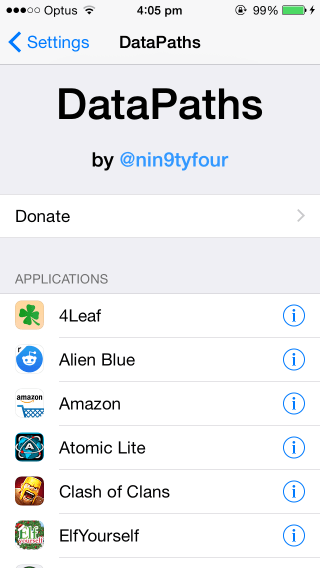 If you are not aware of it yet, you should know that iOS apps run in their own little virtual sandbox. They can do whatever they want within that sandbox, but require special permissions from iOS itself to perform any sort of tasks outside them. To implement this, each app is given a specific directory on the iOS filesystem in which it stores its required files.

Most jailbreak users are familiar with iFile: a jailbreak-only app for browsing the iOS filesystem. It is regularly used for customizing apps, installing jailbreak tweaks that are released in the form of a DEB file, and transferring files over WiFi and Bluetooth.

For the very first use case i.e. customizing apps and applying advance-level jailbreak hacks, you usually need to get into an app’s sandbox directory. Previously, you could just head into /Containers/Data/Applications to then get inside any app’s sandbox, but iOS 8 has made some changes to the directory structure which breaks this functionality.

DataPaths allows is a jailbreak app which allows you to find and directly open iOS app sandbox path in iFile. It can be accessed from Settings > DataPaths, from where you can see a list of all installed apps. Tapping on the app’s name shows you the app’s exact path, along with its bundle path, unique identifier, and display name.

DathPaths is available for free, in the form of a DEB file. You will have to search on Google for ‘how to install a DEB file’, as that is beyond the scope of this article.