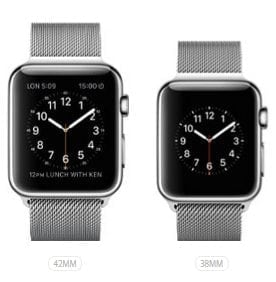 There is now one very, very important reason why you should prefer the 42mm Apple Watch over its smaller, 38mm brother: battery life! Yes, it has come to our attention that the 42mm  Apple Watch battery life is longer than the 38mm Apple Watch. Details after the jump.

The Apple Watch was officially, properly announced less than a week ago, after being teased about several months back in 2014. I personally do not find it compelling at all; it does not seem to solve any problem that I have that can be solved with technology. In fact, it seems like it only creates more problems as one would have one more device to care and carry about every day.

Anyhow, the Apple Watch comes in two sizes: 38mm and 42mm. These are the two possible heights of the main dial. We have comparison photos of 38mm vs 42mm Apple Watch devices in case you want to see those.

Now, you could base your decision of which size Apple Watch to buy on basis of which dial size looks nicer on your wrist, but if you are neutral about that (as I am!), then you should absolutely buy the bigger, 42mm Apple Watch because Apple officially claims that it has longer battery life.

From the Apple Watch Battery page:

So there you go. The ‘Up to 18 hours’ of mixed use all-day battery life claims that Apple made for the Apple Watch were for the 38mm device. You can expect the 42mm Apple Watch battery life to be somewhat longer. Even an hour or two would make a heck of a difference for active people.

On a sidenote, you should also know that when you buy an Apple Watch, it comes with an extra band of the same color, but of a smaller / larger size. If you do not intend on using the second strap, it’s worth trading the second Apple Watch strap using a site like StrapSwap.