SpaceX has been busy with various ambitious projects for the foreseeable future. Further refinement and testing of the SpaceX BFR. It’s planned transport of materials to Mars for the purpose of building the first manned outpost on the red planet. This would be followed by a manned mission to Mars. Before that, a manned mission around the moon with civilian passengers is also on the calendar. We can expect all of this to take place in the next few years.

Looking back, the Falcon 9 rocket has successfully launched the Dragon Spacecraft from the historic launch pad 39A at Cape Kennedy.  This is where 11 Apollo flights, the Skylab, 82 shuttle flights, and five SpaceX launches have taken place. The Dragon has completed multiple unmanned resupply missions to the International Space Station.  The Dragon has also returned safely to Earth everytime since its first flight back in 2012. 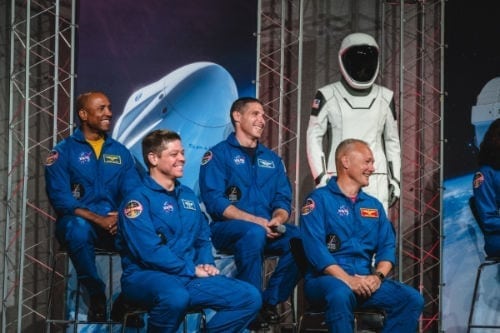 A new milestone has recently occurred just last month. NASA announced the first four astronauts that will be part of its Commercial Crew Program with SpaceX. NASA Astronauts; Victor Glover, Mike Hopkins, Bob Behnken, and Doug Hurley will be the first NASA astronauts to fly in the Dragon 2.

The first two astronauts will be Bob Behnken and Doug Hurley who will pilot the Dragon 2 spacecraft in its first manned mission to the International Space Station. Dragon 2 is fully autonomous but can also be completely controlled manually. This will be the first time since NASA’s Space Shuttle was retired in 2011 that the United States has sent a crew into space without the help of the Russians.

SpaceX’s has a Commercial Resupply Services contract with NASA and Dragon continues to carry cargo to and from the International Space Station. At this point in time, Dragon 2 is the only spacecraft that can return significant amounts of cargo to Earth.

SpaceX along with other companies have proven that space travel and all it entails can be a successful commercial venture. A venture that is not solely government controlled. These projects are incredibly expensive so moving forward requires cooperation between government and commercial partners. I for one am very proud to see American Astronauts once again be launched into space and returned safely in vehicles that are conceived, designed, tested, and built in America.