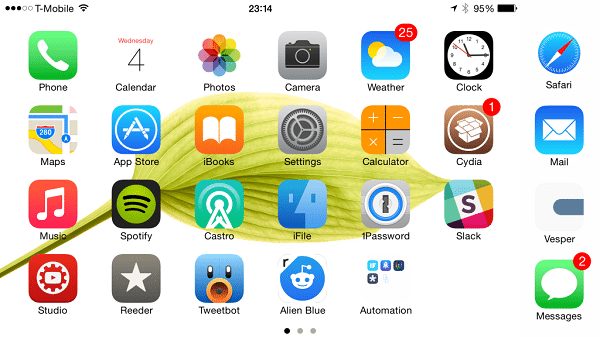 We have come across a brand new jailbreak tweak, PortraitWallpaper, for the iOS that is pretty useful. With the new iPhone, the iPhone 6 Plus, and the iPad users have been given the option to view their Homescreen in the Landscape mode. While this sounds awesome it comes with a side effect. It’s true that you might want to view the Homescreen in the Landscape mode to utilize all the real estate that is offered by the behemoth that is the 6 Plus, but the thing is it can really mess with your wallpapers which are usually images in Portrait mode.

PortraitWallpaper by the iOS dev Skylerk99 fixes your wallpaper in the Portrait orientation no matter how you position your phone. The result being your entire Homescreen interface icons and all shifting to the Landscape mode while your wallpaper remains tastefully in the orientation it was made for. Even if you don’t own the iPhone 6 Plus there are tweaks to replicate the feature (Homescreen in Landscape mode) on other devices so PortraitWallpaper could also be useful for people who have made such alterations.

The tweak, like most tweaks, just addresses a little issue and makes your experience a tiny bit better so it isn’t very feature packed and doesn’t do much else. There is no configuration options just install it and you are good to go. You can give it a try if you have a jailbroken device and get it on Cydia’s BigBoss repository for free.

What do you think about it did you ever feel the need for a tweak like this?

Interested in wallpapers? Check out these 10 beautiful wallpapers for iPad Air 2. If you don’t have a jailbroken device but would like to read how to here.