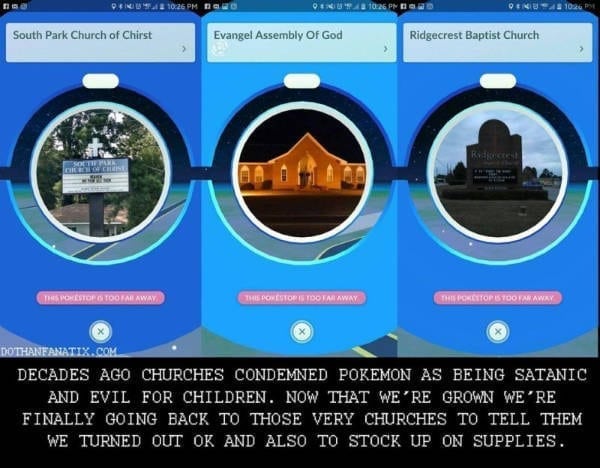 Pokemon Go from the developer Niantic Inc. is one of the most widely talked-about games that has recently been released. While its release was only for Australian and Kiwis (fun fact: nickname for people from New Zealand), the game has gotten worldwide attention over the past few days.

Curiously, one of the things that people are noticing is that most of the locations that the game is taking them to are churches. Whether Baptists, Evangelical or Methodist, it is reported that about 70% of the places a Pokemon Go player is directed to collect Pokemons and items are located in churches. This whole situation has made players feel a bit uncomfortable, especially those who are non-religious, atheist, or not part of a branch of Christianity.

Although many of the landmarks used in the Pokemon Go game come from virtual-reality game maker Niantic’s last VR game Ingress, many people are sharing their thoughts, opinions, and jokes about the phenomenon on social media. Here’s a couple of tweets just to give you a taste:

While this whole thing may only be a coincidence, it is still a little skeptical. Some people are saying that Pokemon Go is just a scheme to force young people to go to church. Is it possible that John Hanke, CEO of Niantic Inc., is Christian and wants young people to go to church? By the way, John Hanke is also the former CEO of Keyhole Inc. This is the company that created the technology behind Google Earth. Keyhole Inc. was acquired by Google in 2004. Others are just taking their Pokeballs and thanking Jesus for them. Various puns have arrived with this new issue including “Pokemon Go (To Church)”. Maybe Pokemon should change their theme song to “Take Me To Church”  by Hozier. It fits nicely.