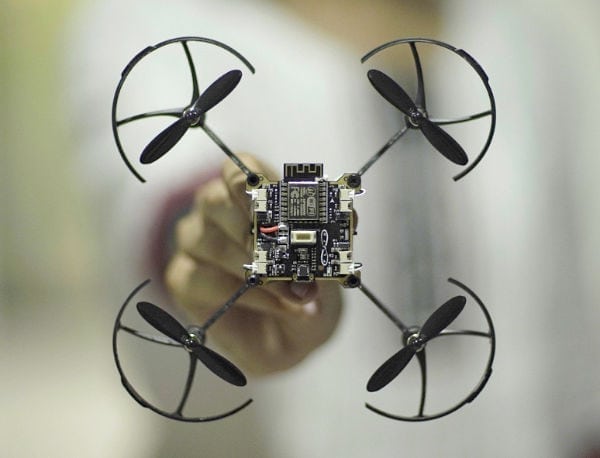 I received an email from Apurva Godbole, the co-founder of the Bombay based nano-drone startup, Drona Aviation (DA). Apurva informed me that his team is working towards fostering drone innovations at the grassroots level.

Apurva Godbole says, that Drona Aviation has “trained 30,000+ students in India–through government & other partnerships with our first drone Pluto 1.0. We’re now taking it to the next level with PlutoX.”

Innovate On A Small Budget

Imagine building and programming choreographed swarms, life-guard drones, an inflammable gas detecting drone, blimps, rovers and even flying cars. What caught my attention is the short amount of time it takes to complete a project like these.

Check out this tinker’s video story of a simple rover project completed in a few days:

“Being tinkerers ourselves, we’re well aware of the demotivating crashes, burdensome coding and other challenges that limit the scope of tinkering and innovating with drones. PlutoX was engineered particularly ensuring agility, durability, and affordability for fellow tinkerers,” says Apurva Godbole, co-founder of Drona Aviation.

“Instead of slowing down tinkerers with a cumbersome process to add hardware like cameras, sensors or even another board to their drones, we want to make development easy for them. We want to fuel their imagination and encourage them to explore more possibilities while tinkering,” says the CTO and co-founder, Prasanna Shevre.

Tech Specs and Features of PlutoX

PlutoX is the most agile and modular aerial platform meant for accelerated development on nano-drones.

Land – Rover, Two-wheeled balancing bot and all that you can make of it.

Using UWB localization technology. Drones are able to know their positions with an accuracy of +/- 10cm.

Using the mobile’s processor is economical and faster for prototyping image processing applications. Once prototyping is done, you could move to other hardware accessories to provide complete autonomy.

A team of engineering students decided to use the drone for rescue at the beach. Pluto was used to prototype this idea.

PlutoX has four sets of reversible motor drivers. This was designed with agility in mind. As a consequence, you can fly the drone inverted.

This project was a part of India’s first drone hackathon. The idea was to land the drone and move on land when necessary to manage battery life.

This project was also a part of the hackathon. The idea was to integrate MEMS-based laser range finder to assist drone in collision avoidance.

Methane gas was the prime cause of the fire at Deonar dumping ground in Mumbai that took days to bring under control. One of our tinkerers wanted to use the drone to detect the concentration of methane in various areas. This idea was very easily prototyped on PlutoX.

August 8th, 2018 is the launch of PlutoX through the company’s Indiegogo crowdfunding campaign.

AviationDronesIndiegogotinker
Previous ArticleMASTERCARD VS. VISA: BLOCKCHAIN PROJECTSNext ArticleThe Highs and Lows at Apple and An Opinion