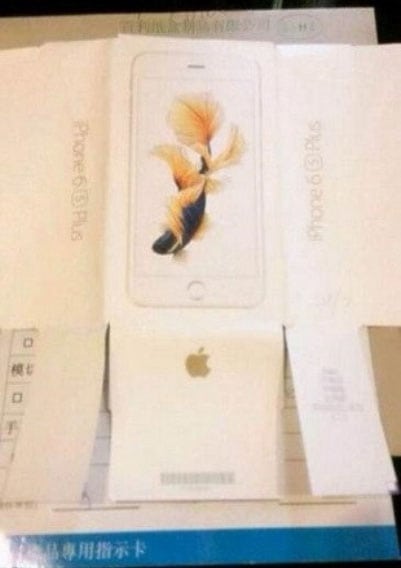 In a new photo acquired by cnBeta via Macotakara , the photo puts on display what is supposedly a the packaging of the iPhone 6S plus. The image has within it a standard white iPhone box similar to packaging material on previous iterations of the device. The box is opened, the lid is lifted and we see a golden “iPhone 6S plus” a golden lettered Apple logo on the bottom and “iPhone 6s Plus” written on the side of casing of the device. The “S” is set within a small four sided shape as is standard procedure on iPhone “S” packaging. The box also puts on display what appears to be a new wallpaper that shows black and gold fish.

On the other hand, the report is still very murky and it is unclear if it is authentic packaging and if the source can be trusted. The material used in the box appears to be thinner than what we a re used to seeing and the wallpaper on display is unfamiliar to even the testers of the iOS betas released earlier this year.
The buzz is that Apple is expected to announce its new flagship phones, the iPhone 6S and 6S plus in its annual event on September 9 which is speculated to be happening in the Bill Graham Centre in San Francisco. The Cupertino-based tech company is also expected to finally unveil its new Apple TV with a new touch-based remote and full Application Store.