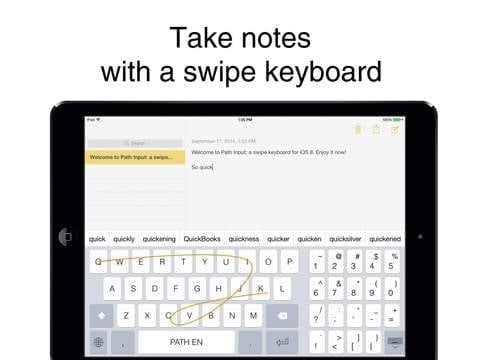 The iPad has a huge screen compared to the 3.5″, 4″, and even 4.7″ iPhones, so the fact the keyboard on the iPad is a simple, scaled version of the same keyboard is a little… boring. Thankfully, with third party keyboard support in iOS 8, the developer community has come up with nice alternatives. The most interesting iOS 8 keyboard for iPad so far is actually the one we are covering today: Path Input.

Path Input differs from other iPad keyboards for iOS 8 by dividing the usual keyboard in two parts. About 70% of the area is covered by a standard QWERTY keyboard, similar to the system keyboard, while about 30% displays a numpad with quick access to symbols, too.

That is not all. The developers were smart to notice that people generally type on a full iPad keyboard using two hands, much like how they use a standard desktop computer. Typing with two hands in landscape mode on an iPad is a difficult task; it would be practically impossible with the keyboard pushed towards the left.

With that in mind, they have made one-handed typing a lot easier by allowing you to swipe over letters without lifting your finger to form words. Auto-prediction helps speeds things up, too.

We honestly have not tested Path Input on our personal iPads for the simple reason that it costs $3.99. Plus, the app’s description is incomplete; no detailed explanation of available features. Screenshots simply show the app being used in different apps, rather than each available screenshot highlighting particular features one-by-one like great apps do.

However, what really pulled us away from the ‘Buy’ button was the fact that Path Input’s official website is not even up at the moment. Either the team behind the keyboard is genuinely bad at marketing, or they don’t give a hoot.

If you do decide to test Path Input, do let us know how it goes!

Learn how to change iOS 8 keyboard if you need help with that.