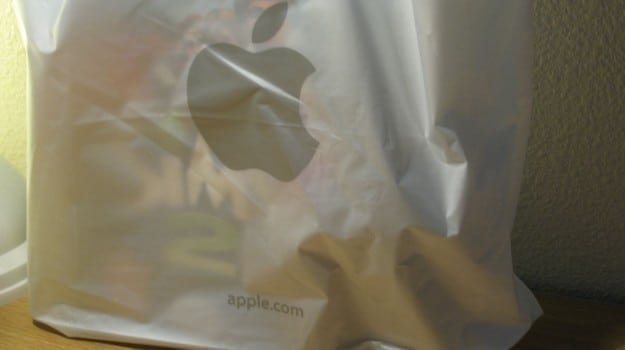 Recently Apple sent out a note to all of its retail employees which states that use of all plastic bags is being discontinued. Paper bags will be exchanged with plastic bags in all Apple stores instead. This means that the iconic drawstring bags of the Apple Store will now be no more!

The switch is going to take place by 15 April 2016. However, all stores are advised to first use up all of the plastic bags currently in stock before the date.

The paper bags are available in two sizes; medium as well as large. They are also made from recycled material. In order to further decrease the use of bags, all retail employees are now told to first ask the customers if they require bags or not before providing them with one.

Apple has had a habit of introducing new designs of retail store bags which are commemorative of special occasions. On the introduction of the Apple Watch, Apple introduced paper bags with handles made of colorful rope. We think the paper bags will be similar in design to the aforementioned special occasion bags might be used by but it is not really clear if this is going to happen or not.

Apple has also been giving gift cards to customers who recycle their Apple devices in the Apple Stores. These cards are called “Apple Renew” cards and they are apparently given to a customer when he goes to a retail Apple store to recycle his old device. These cards are also made from recycled paper.

In March 2016 Lisa Jackson, the Vice President of Environmental Policy, and social initiatives at Apple talked in detail about some of the environmental efforts of Apple. She said that almost 93% of the operations of Apple which are being conducted worldwide are powered by renewable energy sources. She also said that Apple’s new automated robots can now easily disassemble all iPhones and make them easy to recycle. She also talked about the eventual move to the  usage of solely paper bags in all Apple retail stores.

You can see the note which was intercepted by 9to5Mac below. 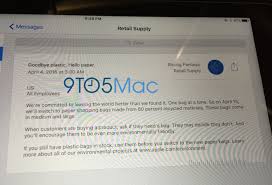