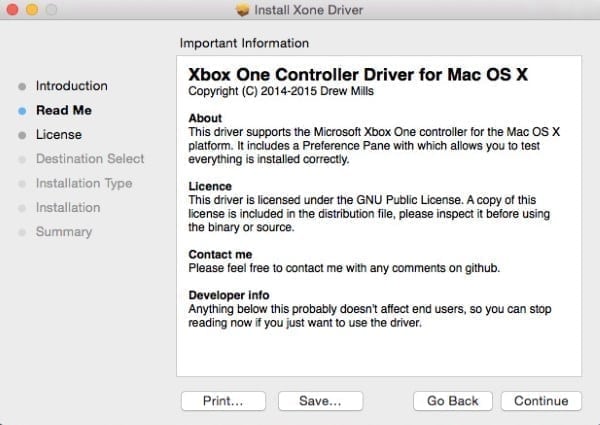 Owners of the Xbox One and a Mac who are interested in using the former with the latter should check out our discussion of two software drivers after the title image. Learn how to use Xbox One controller on Mac OS X!

The original Xbox controller was an abomination. It was the quintessential American controller: big, bulky, and in your face. (it’s just a joke, chill out).

Over time, Microsoft has made tremendous improvements to the Xbox controller. In fact, at one point in time, I preferred the Xbox 360 controller over the PlayStation 3’s puny DualShock 3.

I have not moved on up to the Xbox One or PlayStation 4, so I cannot give an honest opinion of which is better. At this point in their product life cycle, though, it is safe to say that both the Xbox One controller and the DualShock 4 are outstandingly well designed.

Now, assuming you own the former along with a Mac, you would want to know how to pair and use Xbox One controller on Mac OS X. OS X does not come with a ton of games, but the current crop is enough to make occasional use of your Xbox One console controller.

At this moment, there are two ways to use Xbox One controller on Mac OS X. There’s xbox_one_controller, and XOne-OSX. Both are open-source software drivers which assist Mac OS X in understanding how to take input from an Xbox One controller.

Now, what’s the difference between the two drivers? As of typing on February 7th, 2015:

“Really? Why mention xbox_one_controller at all?” you say.

Well, the answer to that is the fact that xbox_one_controller is recognized by OS X as a Human Interface Device, so it will work with all games as soon as the developer works on it some more. Plus, our articles are generally read for a long, long time so if you’re reading several weeks from publication, there is a sweet chance xbox_one_controller will be stable by then.

So, as of typing, I would definitely recommend XOne-OSX [GitHub page]. However, please read through xbox_one_controller [GitHub page] before deciding on which one to use. Installation instructions can be seen on the linked GitHub pages.

controllerXbox One
Previous ArticleHow To Disable Whatsapp Played Receipts On iOS?Next ArticleBrowse The Web From iOS Notifications Center With NCBrowser 8!