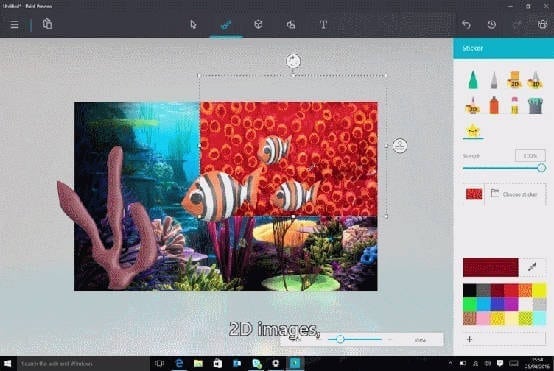 Microsoft Paint can be traced back all the way to Windows 3.0 when it was added as a small bitmap editor. Since then, the program has not changed much. Its biggest revision being the addition of a scenic ribbon which was introduced in Windows 7. Steven Sinofsky, former Vice President of Windows, humorously said that Microsoft wouldn’t wait this long to update the built-in apps like Paint and WordPad ever again. It looks like the software firm is sticking to that promise.

Gone are the days when Microsoft Paint was associated with rudimentary drawings and bad memes. With the latest update announced by Microsoft at their launch event held on the 26th October.

“We’re looking at a brand-new experience that could attract users towards the once forgotten Paint app on our PCs.”

Microsoft Paint now known as Paint 3D enables the user to convert simple sketches and doodles into 3D with a single click. The 3D objects can be manipulated by the user and placed in front of other backgrounds and images. New brushes, new tools, and more features have been added to our old Paint which allows the user to directly draw and change 3D objects. These 3D images can be directly interfaced with 2D images, drawings, and stickers to create a different and spanking new image. Paint 3D has been turned into a modern image editing suite that might one day be able to compete with editing giants like Adobe Illustrator.

The new update compliments the company’s latest jumps in the world of augmented reality.  As expected Paint 3D can be interfaced with the HoloLens display. Using the HoloLens display, users will not only be able to create virtually but will be able to view and modify their work in 3D.  Users can also pull objects from SketchUp, thanks to a partnership with the 3D Modeling software company. Once your picture is done, it can be shared directly with the community from the Paint 3D app. This turns Microsoft Paint 3D into a social app. This will also allow millions of designers and content creators to come together and share their work. Microsoft is also focusing on creativity through technologies like the Surface pen.  The company also demoed how the images created in Paint 3D can be imported into the Edge browser and viewed in 3D on the device.

Applications like Paint are just the tip of the iceberg when it comes to immersive 3D technology. It is not shocking to acknowledge the immense potential of 3D technology in inbuilt familiar programs like PowerPoint. Being able to use 3D images while communicating and presenting will allow the user to create slides that cannot be created with simplistic 2D images.

Paint’s update comes as a breath of fresh air and has been appreciated by the masses. I personally, use Paint for a variety of tasks like basic cropping, editing or text addition. I cannot wait for the new Paint 3D application to incorporate itself as an essential part of the whole Microsoft Experience.