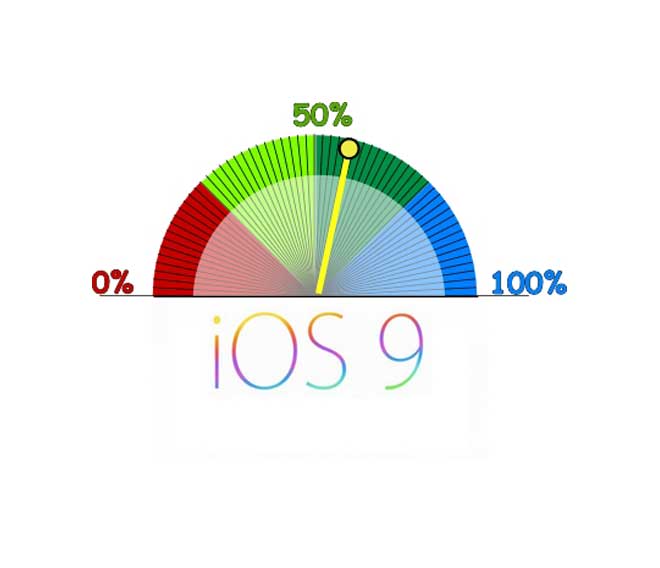 Over 50% Of iOS Devices Running iOS 9

In merely a week of its release, Apple’s iOS 9 has taken the scene by storm. The Cupertino-based company claims over 50% of iOS devices running iOS 9, making this upgrade definitely the quickest spreading OS in the company’s history. Apple, in a press release, called it the fastest iOS adoption ever.

In the press release, Apple SVP Phil Schiller was not shy to boast about how the new operating system (OS) took off with flying colors:

“Customer response to the iPhone 6s and iPhone 6s Plus has been incredibly positive, we can’t wait to get our most advanced iPhones ever into customers’ hands starting this Friday,” said Philip Schiller, Apple’s senior vice president of Worldwide Marketing. “iOS 9 is also off to an amazing start, on pace to be downloaded by more users than any other software release in Apple’s history.”

Apples “over 50%” stat seems a little doubtful with private analytical trackers reporting considerably lower figures. Mixpanel, which looks at web usage and stats, has reported that the new operating system, iOS 9 is installed on approximately 30% of all iOS-based devices, which is a stark contrast to Apple’s figure of “over 50%”. Apple’s own data comes from clocking visits to the App store by iOS devices.

Additionally the technology company is gearing up for its release of the iPhone6S by encouraging possible consumers to walk into their stores and secure an iPhone without a reservation. However judging by the fact that the new iPhone is still in stock on the official Apple website, there shouldn’t be any rush. Although if you haven’t preordered or reserved an iPhone yet it is suggested you show up an hour or so earlier, especially if you wish to buy a specific carrier or model.

Apple also hasn’t released any solid sales numbers for the new iPhones yet, claiming that their only goal is to beat last year’s numbers which included some 10 million phones getting sold in the first week. The lack of firm numbers coupled with the somewhat ambiguous iOS 9 usages statistics suggests that Apple may not be doing as well as usual sales-wise. However nothing can be said until concrete data is provided which, unfortunately, is not available as of yet.