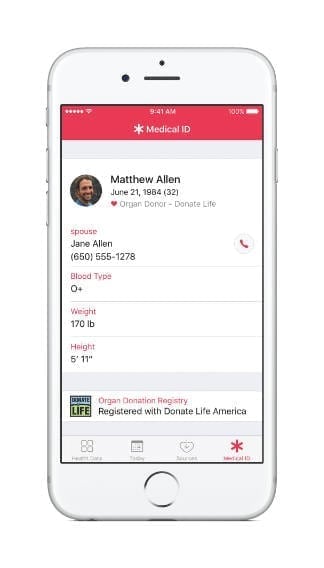 Apple plans to make organ donation an easy and more convenient process through the upcoming software update. The feature will be added to the Health App and will allow users to sign up as organ, eye, and tissue donors “with just a few taps”. The registrations performed on the phone will be logged and sent to the National Donate Life Registry. This feature will be available in the fall when the iOS 10 update is launched. Users who wish to access this feature earlier can do so through the public beta expected to launch later this month.

The Challenge of Organ Donation

The shortage of organ donations available has been a constant problem in the US. This could not be more apparent as Apple CEO Tim Cook told the Associated Press. This problem hits home after the death of company co-founder Steve Jobs in 2011. Suffering from a rare type of pancreatic cancer, Jobs finally received a transplant in 2009 after what Cook describes as an “excruciating” wait. According to the biography of the Apple co-founder, Jobs had turned down a transplant offer from Cook himself.

According to the National Kidney foundation, 121,678 people are awaiting organ transplants in the US. 100,791 of these are in need of a kidney donation. On average, 22 people die every day in dire need of an organ transplant. Patients are being added to the waiting list every 10 minutes. In May, the White House had already announced its pledge to work with Facebook, Google, and Twitter to improve awareness and to bridge the gap between “95 percent of Americans who support organ donation and the roughly 50 percent who are registered organ donors.” It is safe to assume that Apple can be added to this list as well.

“With the updated Health app, we’re providing education and awareness about organ donation and making it easier than ever to register. It’s a simple process that takes just a few seconds and could help save up to eight lives,” claimed Jeff Williams, Apple’s chief operation officer, in a statement given to the press. “Together with Donate Life America, we’re excited to deliver this new feature to iPhone users in the US with iOS 10.”

Apple had first announced iOS 10 at the WWDC last month. SVP Craig Federighi called the update “the biggest iOS release ever for our users”. Although it does not appear to be the significantly noticeable overhaul that was iOS7, it still manages to feature the most numerous visual tweaks since then. Some of the changes included a completely overhauled lock screen and a change in design for apps such as Music, Maps, and News. The early beta of iOS has already been made available for developers. The full release is expected to be sometime later this year, most likely at the launch of the next iPhone. More on iOS beta here.