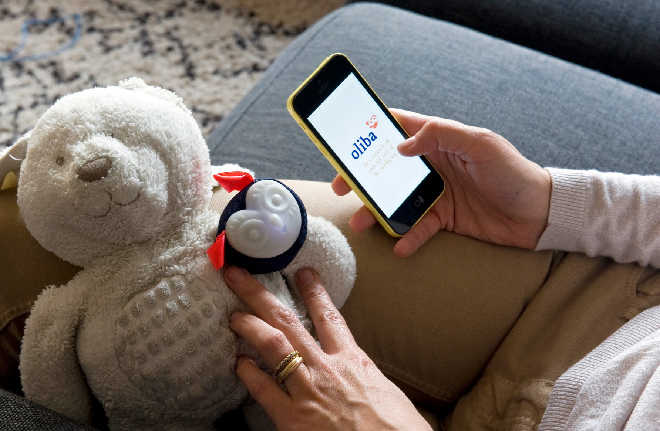 There is this French company that has a product that provides a twist to the smart toy for your little ones, ages 0-5 years old.  Oliba is a smart toy made in the image of an owl, that easily fastens to your child’s favorite cuddly toy, blanket or pillow. Too often a child loses interest in a toy and focuses on something else to keep them entertained.  It can be moved from one favorite toy or object to the next, keeping your child entertained.

The companion app for Oliba makes it fully customizable from your iOS or Android device so it grows up with your children. The iOS App helps parents locate the cuddly toy or object it’s attached to which helps to ensure they don’t forget it anywhere while on the go. If you leave it behind the tracker will alert your iPhone at about 100 feet.

Oliba is also a storyteller and helps children to develop their creativity. It knows some great stories. Within the iOS App, parents can pick the story they like or even record their own story in their own voice. Once stored, children can activate the latest saved story anytime with a long press on Oliba’s face.

Oliba is a buddy for children, it glows in the dark and sings lullabies, chasing away nightmares and any monsters under the bed. Parents can set up all the content in the iOS app. Once the settings are stored in Oliba, children can activate Oliba manually, without requiring an iOS device, just by pressing Oliba’s face. So Oliba works on its own even at Grandma’s.

The developer, Smarty Crew, is a French startup based in Paris, France.  Their focus is smart and playful products for the family.   They developed Oliba and refined it with the help of a large crew of enthusiastic parents in France and the USA.

Oliba and Smarty Crew are one of the Innovative French Startups showcased at the French Pavilion at this year’s CES along with 21 other innovative startups.