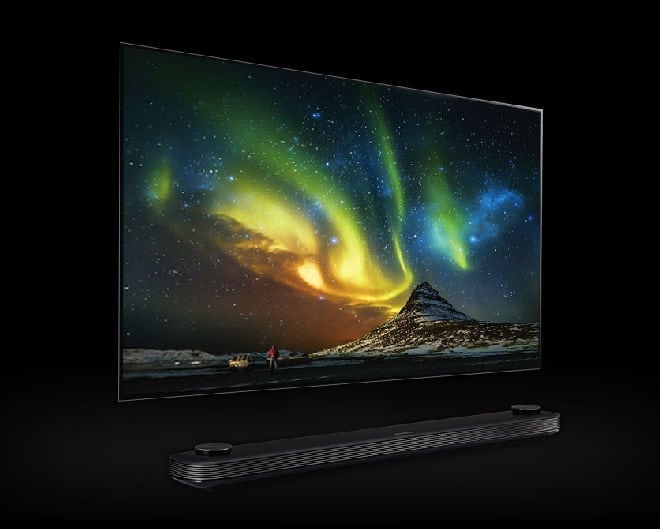 The OLED TV Battle To Blend In

Ever thought of your TV blending into your living room? Samsung and LG are actually experimenting on some that will do just that.

LG presented a set which can be placed as close as possible to the wall. On the other hand, Samsung talked about unveiling a set with brightness levels better than ever before.

LG’s new OLED 4K TV, barely 2.57mm thick is available in 65″ as well as 77″ models. LG claims that they have come up with new magnets made to “fix” the set in a way that it does not cast “a single shadow.”

LG made announcements about its latest TVs supporting four HD formats. Hybrid Log-Gamma will be made in collaboration with BBC and NHK.

Mr Wetherill said, “It is more vibrant and the colors are more distinctive.” He further added, “It does bring a much more impressive and immersive experience – no question about that.”

Samsung’s New Quantum Technology is in its flagship QLED 4J TV. This means that there would be tiny “dots” that emit beautiful colors of light.

Samsung has received criticism over the issue but has decided to stick with a curved display. We are assuming that Samsung is obsessed with curves in its latest products.

Talking about the QLED TV that can achieve HDR brightness of 1500-2000 nits, Jack Wetherill said, “It’s insanely bright.” He further added, “That is pretty power hungry one would imagine, but if they are going down the route of getting as good a picture as they can out of it, then fair enough.”

According to Samsung’s official website, “you can almost feel the warm breeze as you soar over the incredibly clear ocean that shifts color from lustrous emerald green to sparkling aqua blue.”

Explaining further, the website says, “Quantum dots are nano-sized particles that express different colors depending on their size. And by combining them with 10-bit panels, SUHD TV is able to express an impressively wide range of color shades that come together to create the most realistic and accurate color.”

Samsung calls the Quantum Dot display, “The Origin of the Next TV.”

Samsung has revealed images of Lifestyle TV, which is said to be “a beautiful, always-on, truly smart display that transforms the TV into art.”

Panasonic has yet not discussed anything about its OLED TV plans. It likely showed some prototypes on the Consumer Electronics Show floor.

Sony has announced a new 4K OLED TV as a part of its Bravia class. It is not behind its competitors.