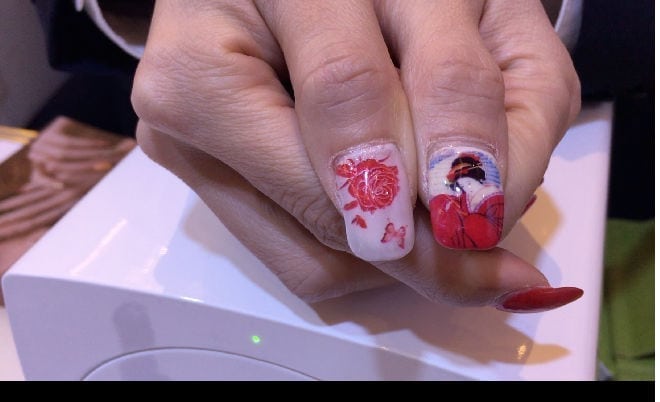 Printing technology has come a long way over the years. My first printer back in the ’80’s was Apple’s imageWriter. Dot-matrix printers held their own for a while even after the introduction of Laser and inkjet printers. As Ink Jets and Laser printers advanced, my ImageWriter reached museum status. Color lasers and Dye Sublimation were next and photo-realistic printers followed.  Precision plotters evolved and some became large-format photorealistic printers that could print anything from posters to billboards. 3D printers and pens are a whole new category that can produce just about anything one can imagine.

If we look at the other end of the spectrum we can find printers that are designed to print very small images on very small material.

I thought I saw it all but while at CES 2017, I stumbled upon a booth hidden upstairs in a small room at the Sands Convention Center where Baby Tech and Beauty Tech were on display.  A printer that focuses on the very small. As small as your fingernail. In fact, that was precisely what it does. It prints all sorts of images and designs on fingernails. O’2Nails developed the ArtPro Nail printer that will print on artificial fingernails or on your own natural fingernails and it does an amazing job.

Complete with a touch-screen and hundreds of pre-designed nail artwork, the ArtPro is geared towards the professional nail salon.

One of the appealing features of the ArtPro Nail printer is the built-in camera that allows you to take a photo which is imported into the image library where you can edit the photo and use as nail art. Equipped with its own touch screen you can easily navigate and edit the nail art. With their app (iOS or Android) you can even import your own images from your smartphone or tablet into the nail art library.

The ArtPro Nail printer can print up to 20 nails at a time in about two minutes. This machine retails for around $2,000 USD and is made in China. It has a one-year warranty. This is more expensive than what you would pay a nail technician.  Perhaps your nail technician is already using one of these printers.

There is a smaller version of this printer that is equally amazing. The O2’Nails Mobile Nail Printer requires a smartphone or tablet and the O’2Nails app (iOS or Android). The app is where the image library resides and where all the editing takes place via your smart device. Like the ArtPro version, the mobile printer provides its own WiFi network. You only need to connect your device to it to communicate with the nail printer. You can print between 500-600 nails with one CMYK cartridge which cost about $30 USD. The O’2Nails Mobile retails for about $780 USD.

Company representative Jade Xu was kind enough to give us a demo of both machines which we captured in this video. Enjoy and remember to Subscribe to CupertinoTimes.com