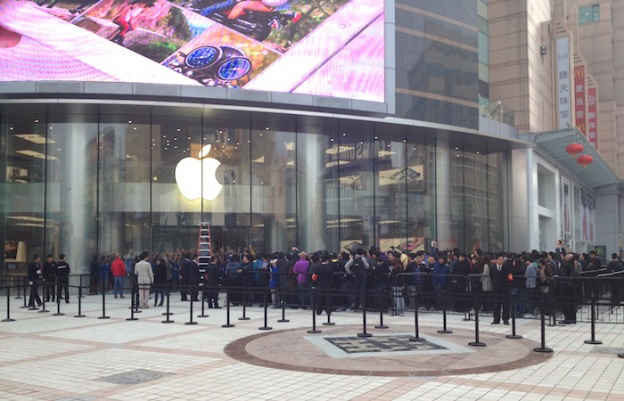 Apple is extremely happy by its market in China. At the moment, China is the largest market that downloads apps from its app store along with no sign of slowing iPhone sales in China, the people there are doing anything to get their hands on the latest iPhone. The figures are in and more than 7 million iPhone 6s and 6s plus were activated after just a few days into release.

Apple has showed gratitude to its Chinese customers by launching the newest model of its iPhone early on. Usually before, China had to wait a couple of weeks and sometimes even months before the latest model hit the stores or the latest models could be approved by the controlling government.

Approximately 5.5 million iPhone 6s have been activated in the first days and 1.63 million iPhone 6s plus. The figures also prove that the smaller model of the two is much more popular and preferred as compared to the bigger iPhone model. Nevertheless, the Chinese loyalty with Apple won’t be seeing a stop sign anytime soon.

The latest addition to the iPhone family, the iPhone 6s and 6s plus do look like their predecessors but have small changes that could create a lot of difference. The 12-megapixel camera, advanced Siri and the 3D touch are some of the changes that the successor has brought.

Apple may have sold a lot of iPhone 6s and 6s plus to the Chinese, but the most preferred model in the iPhones remains the iPhone 6. Mainly because after the 5 and 5s, the iPhone 6 came out to be bigger, was really different than the previous 4 generations of iPhones and it instantly attracted more consumers than ever. The popularity surged at a time when the smart phone industry was falling a bit behind as sales for the first time fell in August by 4 percent every year.

Even though Apple has a very keen and loyal following in China, other smart phone brands that include their local companies such as Huawei and Apple’s arch rival and worldwide popular Samsung have a keen following as well. Many people prefer using their native brand as it promotes nationality and is a matter of pride for them.

Apple sees great potential in the Chinese market and can expect its brand to grow exceptionally over the years and it seems like it won’t stop expanding in China any time soon. Moves such as launching the iPhone on the same day as the US launch has made many happy in China, and if it continues, Apple shall be rewarded greatly!