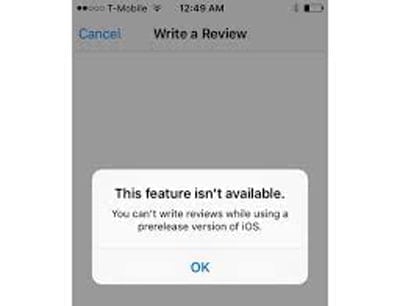 If you’re an application developer then this piece of news will definitely brighten up both, your smile and your day because as of today there will be No App store reviews for iOS beta users!

A change that will be admired by the app developers is that Apple has (finally) disabled the users on beta versions of iOS 9 from writing app reviews. When the beta users will now attempt to review applications in the store, a message will appear and inform them that “this feature isn’t available.”

Earlier, the app developers faced inconvenience due to the ability of beta users to give reviews.

Previously, the beta version’s (inconsiderate) users, not realizing that the apps which were currently present on the App Store were not compatible with iOS 9 beta (and that they had bugs and worked fine on generally available iOS versions), gave them one star reviews which proved to be a major blow for the developers. This authority and ability of beta users has been questioned and challenged for quite some time by app developers. It also made them wonder why Apple allows reviews from users running beta iOS 9 versions.However all these complaints and issues were (hopefully) dealt with when Apple introduced this policy.

This is because doing so gave a bad outlook to the application, makes the prospective app user think twice (or even thrice!)  Before downloading the application. More importantly this action mars leaves a developer to question his product and his abilities.

Although it is still uncertain whether Apple will or can remove the existing reviews from beta users, it is likely that Apple will let the old reviews stay and be buried by new reviews with better ratings.

For now. developers will not have to worry about their applications getting not-so-good reviews by the beta users and can instead focus on more important things which will help them to focus on customer support.

What do you think about this new decision by Apple of not letting the iOS 9 beta users crowd the reviews section? In your opinion, is it a wise move? Or would you want it to go back to the way it was?