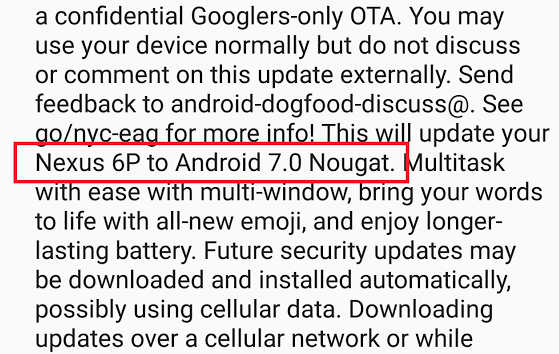 A reddit user to his surprise received a confidential internal OTA with an updated build of Android Nougat 7.0. User “brianmoyano” removed his Nexus 6P smartphone from the Android Beta build, due to battery problems. This would have meant that the user was set to receive a back update to Marshmallow.

However, instead, he received a private internal OTA with an updated build of Android Nougat 7.0. The Android Nougat Developer Preview 5 had the version number NPD90G and this internal version is NRD90M.

In his reddit post the user posted screenshots which reveal that the OTA was confidential and internal only. The images also reveal that “New York Cheesecake” was the actual working codename for Nougat. The internal build had a size of 49.5MB; so it’s not a large one. It probably doesn’t change a whole lot on the Nexus 6P – likely bug fixes and such. Unfortunately, he was not able to grab the OTA download link before installing.

This also solidifies the possibility that we are nearing a final build. Also, quick settings no longer have the Android Beta Program tile. The Android N description that accompanies the OTA update is also slightly different from the beta program.

Keep in mind that this is not the final version. You can expect to run into bugs and occasional errors. Also, the final version for the Android Nougat release could be significantly different. As this seems like a work in progress and more changes will be made.

Back in April, Google announced that Android N would be available to AOSP and ecosystem partners in Q3. With OEMs like Huawei already testing early builds, it appears that consumers might get their hands on the latest update earlier than usual.