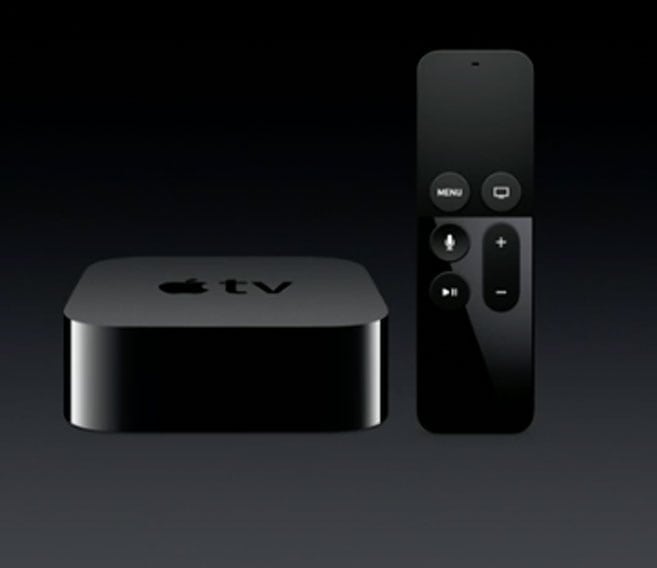 It’s nice not speculating any longer about the latest from Apple. The proverbial beans have been spilled today at the Bill Graham Civic Auditorium. Just about everything has been revealed regarding the new iPhone 6s and 6s Plus and the new iPad Pro.  What I knew the least about before the Event began this morning was the new Apple TV.

Originally released in 2007 then updated in 2010 and then again in 2012, a new Apple TV has been long over due.  Apple’s next generation Apple TV, billed as “The Future of Television” has delivered all that was previously speculated.  This is the most significant upgrade for the Apple TV since it came into existence. This new device establishes the Apple TV as the platform for streaming content, gaming, shopping and more.  Although the Apple TV has not been as successful as the iPhone or iPad, this newest generation of Apple TV is expected to set a new standard and compete not only on the streaming content side but also in gaming with a new remote that also serves as a gaming controller.

The Apple TV will deliver a new user experience with its powerful hardware and a rapidly growing eco-system that includes a growing developer community, it’s very own App Store and the anticipated Apple TV Streaming service that is months away and not to mention original Apple Streaming content that has been rumored.

This set top box contains advanced hardware and software including, the A8 64 bit chip,  Bluetooth 4.0, 802.11ac WiFi with MINO and IR receiver. With connections for Power, HDMI and Ethernet and it has more storage space. The touch-based remote control that uses Siri and Bluetooth eliminates the need to point the remote at the device. You can control your TV’s volume and it contains an accelerometer and a gyroscope.  It lasts up to three months without a charge and includes a Lightning connector for charging. The remote also serves as a game controller with integrated motion sensor. New software named tvOS that includes Siri which eliminates the burdensome search methods in previous models.  Ask Siri for “all movies with a particular actor”, or the title or director, or for the weather or a sports score and she quickly delivers the search results which display in a layer above where you were.

The Touch remote does not use batteries, instead it has a Lightning connector that you can easily charge.  Easily navigate using the remote or just ask Siri.  Skipping ahead or back and if you missed what was said in a show you can ask Siri, “What did they say?” and Siri will rewind 15 seconds and automatically display closed captions over the replay.

The new Apple TV is versatile, affordable and it comes in a $149.00 configuration and a 128 gig option at $199.00. At this price point it will position nicely against its gaming competitors.

Although not mentioned at todays event, the new Apple TV as well as the 3rd generation running version 7.0 or later can also securely talk to your HomeKit devices with the help of iCloud Keychain, your Apple ID and Siri.  This allows you to control your HomeKit accessories from your Apple iOS devices while away from home.

This is a significant upgrade and a game changer in its market.  Check out the Apple TV and let us know what you think.