Out of all the gadgets that I have used in the past year, not one has impressed me as much as the Apple AirPods wireless headphones. Not even their iPhone’s or iPad’s. And it appears that I’m not the only one. According to a survey, they received the highest user satisfaction score out of all the Apple products.

The only downside is that it’s pretty hard to get them. They are mostly sold out, which has caused a demand for pre-orders. Luckily I managed to buy them so let’s get on with the review.

Besides the AirPod headphones, Apple has also included a charging cable and a small charging case. The design of the charging case reminds me of the good old Apple. It has rounded edges and corners that still somehow has a timeless and minimalistic look to it. 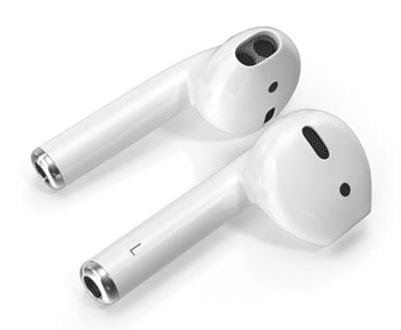 The AirPods itself looks just like the old Apple headphones, the EarPods. The only difference is that instead of a cable, both of the headphones have small tubes. I have read countless reviews that describe them more as hearing aid devices. Personally I think that they look pretty nice. I haven’t noticed anyone looking at me differently either. 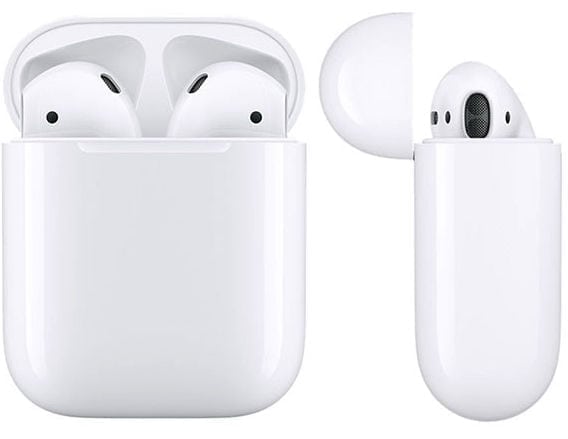 The charging case is really compact and it fits inside the smallest pocket. I’d even go as far and say that it’s hard to find it if you have big pockets. I have actually experienced that. What I don’t recommend is keeping them together with any other objects, such as keys or coins. They will quickly scratch the outside of the case. The same can also be said for the headphones. Which is why I recommend keeping the AirPods in the case when you aren’t using them.

I read a couple of reviews as well before buying the Apple AirPods wireless headphones. And I mostly saw people criticizing the sound quality. However, I must say that I was pleasantly surprised when I first got to use them. I always first test my headphones with classical music. If they pass the test with that, then they almost always sound good with every other genre as well. For me, the AirPods passed the test.

Of course, you can’t expect any crazy studio quality from these small wireless headphones. And there are probably plenty of other in-ear headphones available that are not only cheaper but sound better. But I’m 100% certain that not one of those is as ergonomic and comfortable to wear as the Apple AirPods.

The Apple AirPods have also got a built-in microphone. I have no complaints about its quality either. In my opinion, the audio quality, that the microphone picks up, is much better than most other wireless headphones around the same price range.

This is the part where I can really start praising the Apple AirPods. The headphones pair up immediately after you take them out of the case and put them in your ears. There’s no need to go through any settings. Even when you first use them, your phone automatically gives you a choice to pair up the headphones the second you open up the charging case. And after that, you don’t ever need to do it again.

There are also some useful features. For example, you can just tap your headphone twice to continue playing music. This is especially useful after you have placed them into the charging case as you can continue from where you left off when you take them out. Of course, this feature works the best with Apple Music, however, I have had it work with Spotify as well.

The Apple AirPods are actually the lightest headphones I have ever used. I’d even say that it’s rather easy to forget you are wearing them. Which always makes me worried that what if they come out of my ear. In reality, I haven’t managed to make them drop out yet. I have taken them for a run and even used them at the gym, but they are still practically glued to my ears. Still, I have random urges to push them deeper into my ears every now and then.

Of course, you can always complain about the wireless headphones functionality. The only function that you can configure is the double tap. You can use it to activate Siri, put your song on pause or answer a call. And no, you can’t change the volume on the headphones. For that, you’ll still need to reach for your phone.

Another thing that didn’t quite reach my expectations was when I tried using the AirPods with multiple devices at the same time. For some reason, I thought that the AirPods would automatically discover which device I was currently listening to music from and paired up with that. In reality, I still had to manually pair them up myself. True, this time I didn’t have to open up any settings. Instead, all I had to do was open up the Command Center and I could do it from there.

The battery life is, however, another strong reason why to buy them. A mere 15 minutes of charging time gave me around 3 hours of continuous music. This is an extremely good result that no other competitor comes even close to. In addition, the charging case works as a portable battery and holds up to 24 hours of juice.

I can truly recommend the Apple AirPods for everyone that loves music and has an iPhone. Of course, the problem is always the price, as these aren’t the cheapest wireless headphones available. However, I haven’t once regretted buying them. So if money isn’t an issue, then these will definitely bring you joy.

One more thing I want to add. I recommend trying on the EarPod headphones before buying the Apple AirPods. If for some reason they don’t sit well in your ears, then the AirPods won’t be good either. In which case, you should look for something else.

Author Sven Von Fawkes is a full-time technology geek and a freelance writer who is currently studying journalism at USC. He is passionate about technology and has previous experience from being a Product Manager at BestBuy. He currently manages a technology blog called Tenpire.