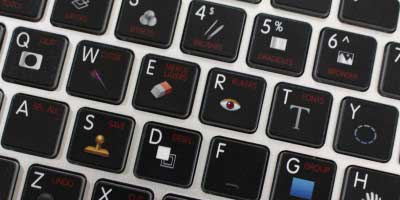 The popularity of digital media has seen a meteoric rise and it seems that it doesn’t plan on returning to the surface anytime soon. This is evidenced in the prominence of the work of graphic artists, photographers and designers who use colour and line to add to the beauty of their work.

As far as Photoshop alternatives go for Mac users, Pixelator is one of the absolute best. It is a versatile image editing tool with tons of keyboard shortcuts, almost too many for one person to use. Now, Editors Keys, a company based in the United Kingdom is releasing a keyboard that is designed specifically for Pixelator. The device itself is basically an Apple keyboard with a numeric keypad, however, it has custom key decals which make editing so much quicker; perfect for someone who hasn’t fully grasped much of Pixelator’s functions.

It has the exact same build of a standard Apple keyboard. It consists of an angled aluminum sheet with a plastic base with two USB ports on either side to enable connectivity with multiple USB 2.0 peripheral devices at your convenience. It feels just like a custom keyboard for Apple would.

However, we’re here to discuss the main feature of the product, the decals. Many users are impressed with how well the decals can be applied to the keys. It is a common complaint with such products where they feel almost like stickers and something feels amiss while typing. It’s hard to shake the feeling you get when the decal doesn’t quite line up with the keys while other such products often feel very much like stickers. This is what sets Editors Keys products apart; the precision and attention to detail with which their products are made.

Shortcuts are clearly illustrated on the keys. The main shortcuts are images corresponding to their icons. Secondary shortcuts which are required to press the CMD key to execute are highlighted using red text. The colour of the text makes them difficult to find as light reflects off of them which is made worse by the small typeface. Perhaps some more contrast should have been used with the colouring of the keys.

The keyboard setup saves a ridiculous amount of time and is very flexible in its use of set tools and their appearance on the screen. It seems that the makers were conscious of how some features can be intrusive or even annoying for end users. For someone who uses image editing software regularly this is a must have and also gets you familiar with the ins and outs of Pixelator itself for newer or casual users.

It can be bought for the Mac from EditorsKeys.com for $125 USD plus shipping costs with a $172 USD variant also available. The company sells custom keyboards for other image editing software such as Photoshop and many others.