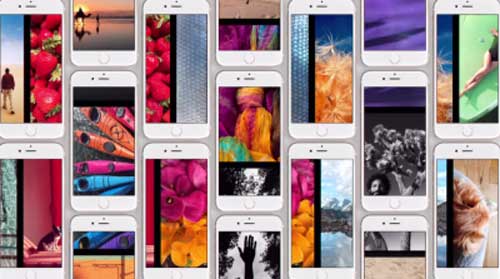 A new iPhone ad “iPhone – Photos & Videos” which emphasizes on iPhone’s photographic capabilities was posted on Apple’s YouTube channel. This ad is the fourth video of the recently launched ad campaign which goes by the tag line “If it’s not an iPhone”.

Apple’s marketing team has put a lot of efforts and are getting a great feedback from its recently launched artful advertisement. The ad comprises of a melodious tune, bright colours and many iPhones which are strategically arranged. The iPhones are placed in such a manner that it lays out a collage of various colourful bright pictures and videos on the screen. All these radiant iPhone screens make the advertisement more appealing and catchy. The ad includes a voice over in which the narrator points out the popularity of the iPhone as a camera, its ease to use and how it makes taking photographs and recording videos a better experience. In the 30-second spot entitled ‘iPhone – Photos & Videos’ the narrator brags

The style of the video is similar to the other ads which were released earlier in the same campaign. Three ads were posted in the previous month and were titled “Loved,” “iPhone – Hardware & Software,” and “Amazing Apps”. This particular campaign is the third series of ads for the iPhone which are preceded by an initial set of comedy ads from Jimmy Fallon and Justin Timberlake and the “Shot on iPhone 6” campaign that stresses on photos captured with the latest iPhone 6 and iPhone 6 Plus.

Apart from this attractive marketing efforts Apple has also launched another out of the box web campaign that goes by the name “Why There’s Nothing Quite Like An iPhone”. As it is self-evident from the title, this unorthodox advertisement campaign focuses on attributes of iPhone which differentiate it from competing devices. Features both, software and hardware such as Touch ID, Apple Pay, Camera, Resistance to malware etc.