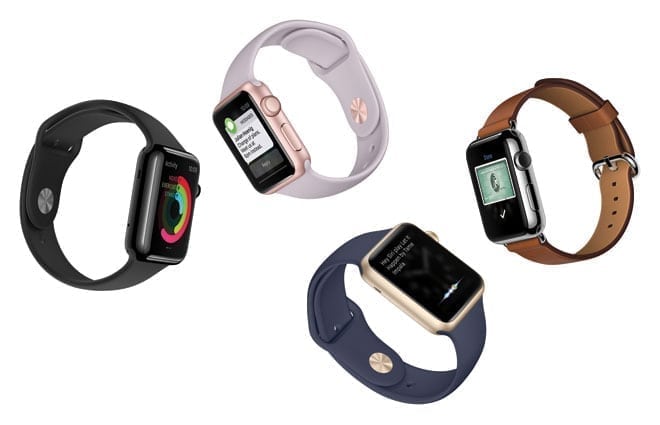 The Apple Watch is the newest category of Apple’s products. The Apple Watch was announced last year at Apple’s September event. It was released this past April and has been a “life-changing device”. With Apple’s 97% customer satisfaction rating on the Apple Watch, it is a no-brainer that it is a successful device.

During Apple’s June event, the company gave a preview of what would later be the update to Apple Watch’s Operating System, watchOS 2. At today’s September event, Apple announced a number of new Apple Watch updates including a couple of upcoming apps such as Facebook Messenger and iTranslate. One of Watch OS 2’s new features is the ability to put the Apple Watch in nightstand mode while charging. Native apps have come a long way too. More features are being added to native apps. One of the most emphasized health-related apps, Airstrip, allows a pregnant mom to live stress-free by using her Apple Watch and a monitor, provided by her doctor that allows her to listen to her baby’s heart rate, gather vital data and send it to her doctor to monitor how her baby is doing.  The doctor can later review the data and message back on the condition of her baby.

Aesthetic improvements for the Apple Watch were also announced.  The Sport now comes in new additional colors. Probably the most striking was the Rose Gold and the Gold. They all come at the same price as the Sport collection. The Apple Watch collection also got a new member of the family—the Space Black Stainless Steel. It has been a very popular color for the Apple Watch Sport so far.

Apple also introduced new watchbands for the Apple Watch. One of the most unique watchbands is the new Hermes leather band.

Apple and Hermes have created a beautiful new collection of watchbands. They will be available in select stores in October. The original leather bands for the Apple Watch now comes in two different tones along with a new RED Apple Watch. The fall collection of new bands come in a variety of new colors. These colors range from orange, lavender, stone, antique white, to midnight blue. The new colors are astonishing and it will bring a whole new opportunity to customers to have more variations and choices on the customization of their Apple Watch.

All the new models have started shipping today (September 9, 2015) and WatchOS 2 will be available on September 16.