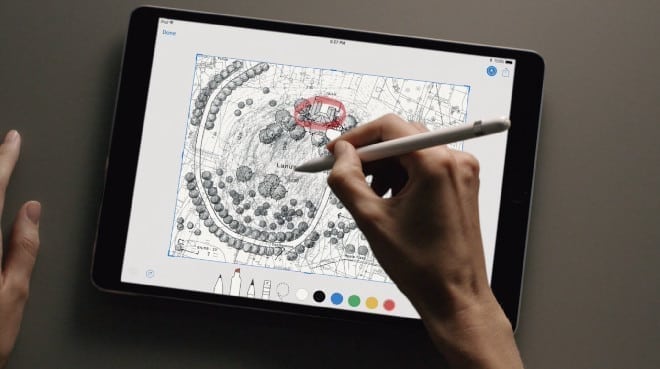 I have been waiting for the 10.5 inch iPad Pro to be released and I was not disappointed at all from what I learn in its introduction at WWDC. On those occasions when a piece of advanced hardware is coupled with cutting edge software we get amazing results. At WWDC 2017 Apple has shown us such a combination with their announcements of the new iPad Pros and iOS 11. The new iPad Pro is available now but it will ship with the current iOS 10. We will have to wait until Fall to experience the power and innovation that was demonstrated at WWDC with both the iPad Pro and iOS 11.

The 12.9” iPad Pro we know is now available in a 10.5-inch configuration. By reducing the size of the bezel by about 40% more of the screen is the result in the smaller version. This change allows for a full-size onboard keyboard and a perfect fit for the Smart Keyboard.  A Japanese JIS keyboard was also announced.

The new iPad Pros have new Retina displays featuring TrueTone, wide color gamut which supports HDR video, ultra-low reflectivity, and 600 nits providing 50% more brightness. I am interested in this because the Las Vegas sun can really make the screen difficult to see. A new improvement named Promotion has double the screen refresh rate from 60 Hz to 120 Hz. This means motion content will be smoother and more responsive.  The higher refresh rate also provides improved performance from the Apple Pencil reducing latency to 20 ms (milliseconds).

The new iPad Pros are not only more powerful than previous versions but most laptops as well. The A10X Fusion chip has a six-core CPU that includes three high-performance cores and three high-efficiency cores. There is also a twelve-core GPU. The A10X provides a 30% performance increase over the existing A9X chip and 40% faster graphics. With all of these performance improvements, battery life is still 10 hours in the new iPad Pro.

The iPad Pro uses the same 12-mega-pixel camera as the iPhone 7 that can capture and edit 4K video.  It also has TrueTone LCD Flash.  The front facing camera is 7 Megapixels with full-screen Retina flash.

The new iPads support USB 3.  This will deliver faster data transfers be it from a camera or SD card.  It also delivers faster charging times.