NDS4iOS has stopped being available for download without jailbreak, but we have found a suitable NDS4iOS alternative in RetroArch for iOS. Check it out after the title image.

Our article on Nintendo DS emulator NDS4iOS is one of the more popular ones here at Cupertino Times. It is popular because of the fact that NDS4iOS could – in the recent past – be downloaded on iOS 8 without jailbreak. That was before Apple patched the date-time exploit that similar apps like MovieBox and GBA4iOS used (although they later managed to loop around it, of course).

Now, NDS4iOS is yet to emerge on sites like pgyer, so what should one do if one wants to play Nintendo DS games on iPhone and iPad without getting into jailbreaking? The answer lies in the excellent multi-emulator RetroArch. Retroarch, then, is a suitable NDS4iOS alternative for our readers. RetroArch can also emulate these consoles:

RetroArch has existed on iOS for the longest time now. You can find it on Cydia but again, that requires jailbreaking which you obviously do not want to do. To download Retroarch / NDS4iOS / SNES4iOS / Provenence alternative for iOS 8 without jailbreak, follow these simple steps:

That’s it! Now check your home screen. An app will start downloading. It took over 20-30 minutes for us, despite being a small 30MB download. Perhaps Pgyer’s server’s aren’t doing well. After installation, you will have to search for and download ROMs yourself, however. Sharing ROMs is illegal, after all. 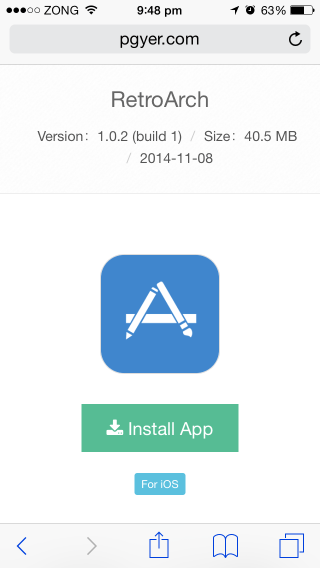 We tested RetroArch on an iPhone 5S running iOS 8.1.2. To be perfectly honest, it did crash after installing. In our experience, apps downloaded and installed from Pyger do work unreliably. They work on certain devices, and they don’t work on others. We are publishing this post under the assumption that it hopefully will work for your iOS device!