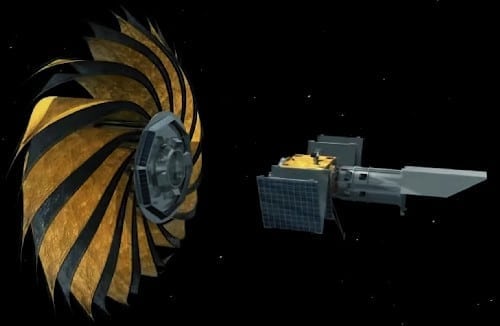 Origami is the Japanese tradition of paper-folding. The ancient art form may just be used for fun in Japan but in the United States, it has been used for something that serves a much greater purpose. NASA has made full use of the paper-folding techniques and has seen these serve as an inspiration for many spacecraft.

Origami can be seen as something that is relatively simple but the truth is, it hides complex mathematics within its creases. One question that has baffled the NASA engineers on many occasions is how to pack the greatest amount of spacecraft in the smallest space possible.

This is where the Origami stepped in and answered their questions. One such instance where Origami helped the engineers is the “Starshade” project. This is something that will help the scientists’ photograph exoplanets with much more ease. Imagine taking a photograph of something on which the Sun is shining from behind. You can get the photograph but you are unable to capture all the details. You can use a shade to cover the rays. The project Starshade serves the same purpose. It is a huge folding iris that has been proposed as a way to block light from distant stars. It would unfurl to a diameter of about 85 feet in space.

Something that big makes it very hard to transport it into space. Any damage to it would mean that the light can pass through and defeats the purpose. This is the main reason that NASA started looking at a folding pattern inspired by Origami.

Manan Arya, a technologist working on Starshade said, “We use multiple layers of material to block starlight, separated by some gaps so that, if we do get hit, there’s a good chance that there won’t be a line-of-sight puncture,”

The plan involved looking at algorithms that would allow the sheet to be folded perfectly. “A huge part of my job is looking at something on paper and asking, ‘Can we fly this?'”

Arya said. He has been fascinated by Origami for a number of years and even his Ph.D. thesis is about the use of Origami in space superstructures.

“Once I realized this is how you fold spacecraft structures, I became interested in origami,” Arya said. “I realized I was good at it and enjoyed it. Now I fold constantly.”

Arya is not alone regarding the infatuation with Origami.  Robert Salazar, a JPL intern who helped design the Starshade folding pattern said,

“With most origami, the magic comes from the folding. You can’t design purely from geometry. You need to know the qualities of the material to understand how it will fold. There are so many patterns to still be explored. Most designs are for shapes that fold flat. Non-flat structures, like spheres or paraboloids, largely haven’t been done.”

There is one use of Origami I never thought I would see. You can check out the details of these projects in this video from Seeker.