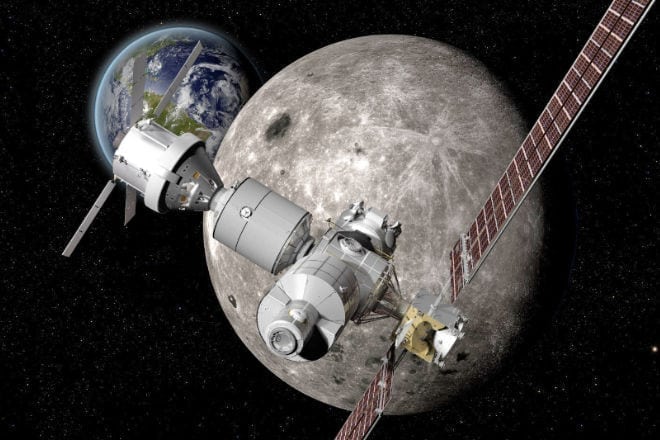 The United States and Russia may not always have seen eye to eye but they are of the same mind when it comes to space exploration. This was evident in the joint statement by NASA and Russian space agency Roscosmos, at the International Astronautical Congress in Adelaide, Australia. They expressed their intent to work collaboratively toward the development of the deep space gateway, a space station further out from Earth, orbiting the Moon, as a staging point for both lunar surface exploration and deeper space science.

NASA wants to develop its deep space gateway and they realize that it is not a simple task to achieve by itself. It will be made substantially more difficult if a nation tries to attempt it singlehandedly. They will need cooperation from all the nations they can get.

“While the deep space gateway is still in concept formulation, NASA is pleased to see growing international interest in moving into lunar space as the next step for advancing human space exploration,” Robert Lightfoot, NASA’s acting administrator at NASA Headquarters in Washington said in a NASA press release announcing the news. “Statements such as this one signed with Roscosmos show the gateway concept as an enabler to the kind of exploration architecture that is affordable and sustainable.”

There are already grounds for cooperation in space exploration in the form of the International Space Station. It is also expected that Canada, Japan, and the European Space Agency will also be coming on board sooner or later.

“I envision different partners, both international and commercial, contributing to the gateway and using it in a variety of ways with a system that can move to different orbits to enable a variety of missions,” William Gerstenmaier, associate administrator for Human Exploration and Operations at NASA, said in an earlier statement “The gateway could move to support robotic or partner missions to the surface of the moon, or to a high lunar orbit to support missions departing from the gateway to other destinations in the solar system.”

Russia has planned to colonize the moon for quite some time now and wants to build a Russian base. It wants to send its astronauts to the moon before 2030 and this partnership with NASA is a means to achieve their goal possibly behind schedule. The United States, on the other hand, is more interested in Mars and this is the excellent opportunity to build the grounds for travel to the red planet.

The reason for building it near the moon has a number of benefits. It gets us close enough to the moon to control robots on the lunar surface. It also presents us with the perfect station for many missions in the future, both lunar as well as Martian.