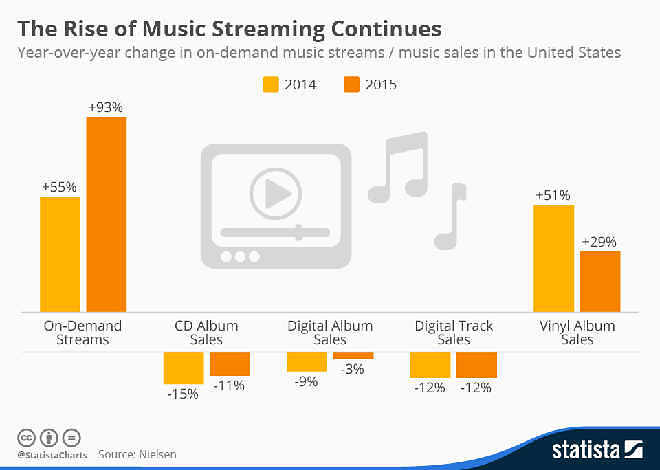 Music streaming is an ever growing activity that we all enjoy.  This is supported by recent reports, for example, the Financial Times reported that Apple Music passed 10 million subscribers. However, Spotify is beating the pants off of all its competitors in the streaming music market and remains the leader.  Spotify has reported that in the second half of 2015, they have seen their fastest subscriber growth in its seven-year history. Spotify’s subscriber base is somewhere between 25 and 30 million when you add total monthly listeners to their ad-supported free tier the number jumps up between 75 and 100 million.

Nielsen recently published its year-end report on the music industry in the U.S. and it says that again, music streaming was the winner over the past 12 months. Apple Music was omitted from the Nielsen report for reasons unknown to me and counted 317 billion on-demand streams in 2015.  This number is up by 92.8 percent from the previous year. That means streaming growth continues to accelerate as more and more people are drawn to the idea of streaming music rather than owning it.

Like any industry, when a portion of its market grows in popularity it likely means another segment is shrinking. CD album sales declined by 11%, album downloads lost 3%, and digital track sales dropped by 12%. The only other format that grew in popularity is the format of analog music lovers, vinyl, which continued to grow with a 29% increase in LP sales in 2015.

Since we are speaking of the music industry, we wish to take this opportunity to respectfully express our sadness upon learning of the loss of David Bowie. David Bowie had released a new album named Blackstar, just a couple of days before his death. Some interpret this as his epitaph. Our sympathy to the Bowie family as we mourn their loss.