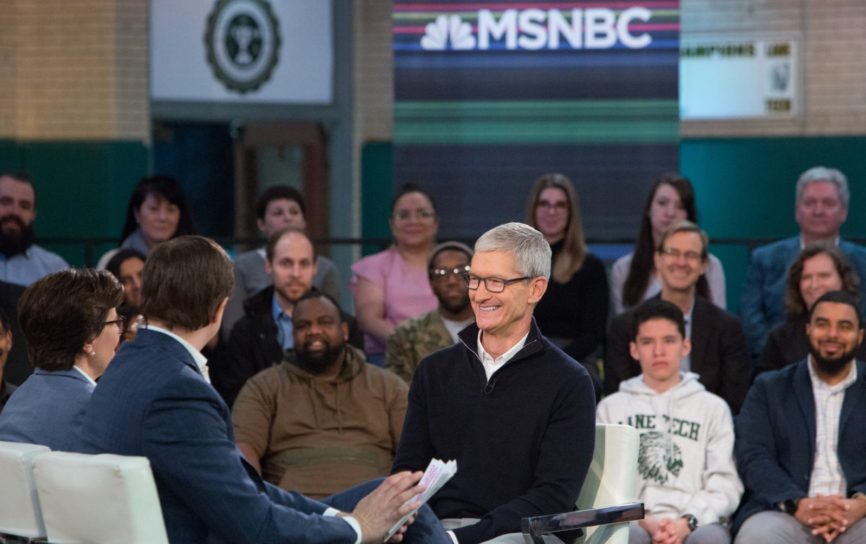 On Friday, the MSNBC show “Revolution” hosted an interview with Apple CEO, Tim Cook. The hosts Kara Swisher and Chris Hayes sat with Tim Cook for over an hour and the conversation was interesting, to say the least. Privacy, Facebook, and DACA were on the list of topics discussed along with others. We are going to summarize what we heard here. Audio of the entire interview is available in the podcast Recode/Decode, hosted by Kara Swisher.

Apple is approaching the trillion dollar mark as far as the company’s real value.  But there is another value in the way this company does business.  Its firm position on privacy, its social consciousness, its passion for education, an optimistic outlook for the future, and more.

Apple And Its Commitment To Education

The conversation began with a recap of what was discussed at Apple’s recent Education Event in Chicago last week. Tim said that the company is not looking to replace teachers but rather provide tools that amplify teaching and learning in public education. This is what I drew from the event as well.

Tim Cook also spoke about a free training initiative provided by Northwestern University.  This training is available to any teacher in the school system who is interested in learning about Apple technology and coding. Teachers with this skill set would be better prepared to introduce and use technology in the classroom.

I was surprised to learn that coding in Chicago schools is now a requirement for graduation. The expectation is not that all students become programmers, but rather develop and improve problem-solving skills, critical thinking, and use of logic, which is what coding is all about.  These skills can be applied to just about any course of study or work.

This is not to say that there are few coding jobs out there. Currently, there are approximately 500,000 coding jobs in the US alone that are not being filled. That number is expected to grow to about 2,000,000 in the next few years.

One point raised in this interview is something I personally preach to my daughter and practice in my life. That is that Education is a lifelong pursuit. It is no longer just 12 years, then perhaps two or four years or more of college and your done. The world is changing rapidly. Skill sets evolve, and jobs change. I don’t mean we all need to be enrolled in an educational institution for life. With today’s tools and the Internet access to information, lectures, coursework, and new skills are only at arm’s length away.

Retraining For A Changing Job Market

As a country, we have not done a very good job of retraining workers whose jobs have become obsolete or eliminated. Government retraining programs have been around for years but have not really been all that effective. It seems to me that the kinds of education initiatives being pursued by Apple will result in a more flexible workforce. Tim Cook mentioned that he feels technology companies should not be waiting for the government to solve this huge and complex problem.

“This should be something that government and businesses should be working on.”

“And so there are plants going in many different places and we have always made many of the parts here. What people just fixate on because I think it’s just a misunderstanding, is that they just see where the final product is assembled and say, oh, that is not done in the U.S. But in a global world, you begin to do things in a variety of countries, and so you source components somewhere, some other components somewhere else, you assemble yet somewhere else. And then those products go everywhere in the world. That’s how a global system works.”

On immigration, Apple is a company that hires a lot of immigrants. A number of the countries that some Apple employees are from have government subsidized education. By comparison, the cost of college in America is too high. Until something changes the employee pool needs to be expanded beyond our borders. An added note is that a college degree is not necessarily required for a successful career in technology.

On Privacy. Tim Cook stated that Apple does not see its customers as “the product” like Facebook or other social media platforms. He says that to Apple,

“privacy is a human right, a civil liberty and something that is unique to America.”

Near the end of the interview, a member of the audience asked this question. “Knowing what you know now, what would be the greatest piece of advice you would give to your high school self? Mr. Cook elaborated how he looked for his purpose everywhere and couldn’t find it back then. At one point he found it and said,

“We all have the same purpose. Our purpose is to serve humanity”

This was one of the best interviews I’ve heard from a tech industry leader. Check out the entire interview here.