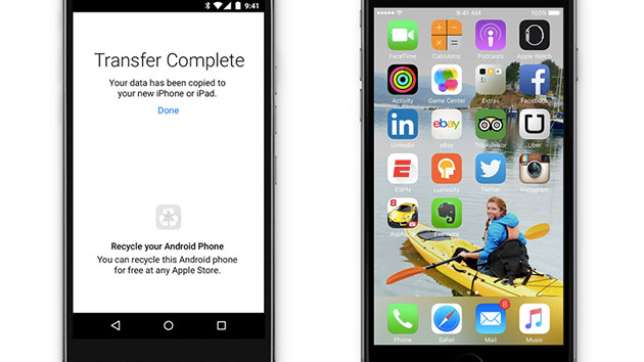 Closely following Apple’s release of the iOS9 earlier, the company also made available to the public, the “Move to iOS” android application.

The application which goes by the name, “Move to iOS” enables the android user to do just that; move to iOS. It allows the user to smoothly transition over to either an iPhone or iPad (as the name of the application suggests). Available for free on the Google Play store, the application works with all versions of android 4.0 or above and requires a working Wi-Fi connection to be functional.

Aiming to encourage android users to pick up an Apple device, this application targets the demographic that would usually be put off by the hassle of transferring all their data manually, in case of a change of device.  The app allows the user to make the transition from Android to iOS almost effortlessly with its ability to transfer media, email, messages and even browser settings to your new Apple device with very little user interaction needed. One of Apple’s main goals with this app is no doubt, to provide potential customers with a tool capable of transferring data between devices with little to no loss.

How to move to iOS

Instead of using  the conventional and somewhat unreliable “Cloud Storage”, “Move to iOS” transfers all of the user’s files directly to the Apple device over a private Wi-Fi network. The app prompts the user to download any applications that were on the previous device and are free on the App store, any paid apps are instead added to the wish-list allowing you to keep track of any applications your new phone might be missing.

The application, and hence the transfer, is compatible with all older models of the iPhone and iPad as well as the latest version coming out on the 25th of September. However, the app requires an android device running 4.0 KitKat or above on the other side. This is perhaps Apple’s most aggressive move to coax android users to their side, and with the release of iOS9, the release of the new iPhone 6s and the iPhoone Upgrade Program the timing is perfect.

Is it a good move by the Cupertino-based company? Will the technology company be successful in attracting android users?  Don’t forget to comment and tell us what you think about the launch of this new application, “Move to iOS”.