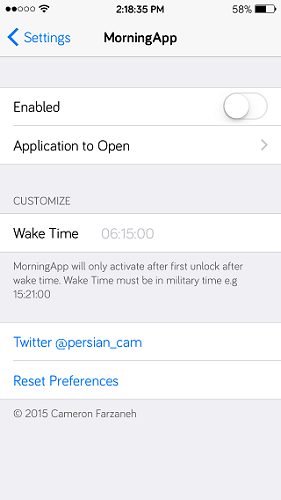 In the world we live in today smartphones, tablets and computers are our constant companions from the second we get up in the morning till we finally give up and doze off in the middle of texting or browsing late at night. Most of us even use these devices to set alarms on and are woken up by them. And what do we do when we finally do get up? Yes, we check our phones! MorningApp is a tweak that takes this behaviour into account and adds convenience to our tech obsessed lives.

Because checking our phone is usually the first thing we do in the morning someone noticed this pattern and came up with a tweak for iOS that launches a pre selected app upon the first unlock of the day. It is very smart of the developer to make this observation that generally people have a ‘favourite app’ or in other words the first app they open when they unlock their phone in the morning. For example some people check their texts as soon as they wake up. So they could set the Messages app to open when they first unlock their phone in the morning. Then when they will wake up they will just need to unlock and the Messages app will open by itself.

To get MorningApp you obviously need a jailbroken iOS device. And like all good tweaks this adds a very small, well thought and smart functionality. After you get MorningApp just go to the settings page and choose the app that you want to be launched when you unlock your phone in the morning.

But that isn’t all there is to MorningApp, they have also included an option to specify a time before which the selected app is not launched. This is because you may wake up at night and might want to use your phone to check the time or as a light source but you wouldn’t want, say, the Messages app opening all of a sudden. Talk about taking everything into account from the user’s perspective. If you set the alarm for 7 a.m. just change this option in the settings from the default 6:15 a.m. to 7 a.m. After the first unlock on all subsequent unlocks you will be taken to the Homescreen as usual.

So if you have a jailbroken device MorningApp is a nice little tweak you can get for free from Cydia. If you don’t learn how to jailbreak your device.