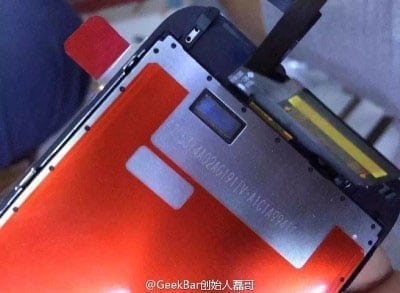 Apple’s iPhone 6 and 6 plus are still selling like hot cakes but that does not stop people from  anxiously waiting for the release of next Apple smartphones, which could be just three months away from its release. As the expected release date is approaching more photos of iPhone 6s have surfaced along with predictions regarding the features and hardware have surfaced on the internet.

In the face of a fresh wave of rumors, more photos of the upcoming Apple phone have surfaced which show the claimed ‘iPhone 6s’ display assembly. ‘GeekBar’, which is a phone repair company based in China has shared a series of photos which shows the front and back views of a display unit reportedly bound for Apple’s much awaited “iPhone 6s” handset. This set of pictures is more interesting because of the fact that unlike these, all the previously leaked pictures of the claimed phone revealed the front panel without LCD components.

The photos of the phone released are somewhat similar to the current iPhone 6 models with the same rounded glass edges and general shape, with no changes in the position of the ear speaker and the camera. On the backside of the LCD module and the other internals are concealed by the usual protective metal shielding. However, a few important differences stand out.

The most conspicuous change is an off the mark rectangular cutout which is located towards the top of the screen. Moreover, an unknown component can also be seen protruding out of the surface but due to the low image quality its exact purpose cannot be determined to a surety. By assessing its position with respect to the iPhone’s expected logic board and the battery layout, it is guessed that the part under discussion could be a grounding insert.

Another important observation is that the alleged “iPhone 6s” itself appears to be fixed with rivets inside the display. This is a major change from the existing iPhone display backings which are held on by clips and screws. It is speculated that these black dots could be related to the Force Touch technology, a featured rumored for inclusion on Apple’s upcoming phone. It is rumored that in order to accommodate the new Force Touch technology the iPhone 6s could be slightly thicker than the iPhone. But there is nothing to worry about as such a minute difference would not be easily perceptible to the users.