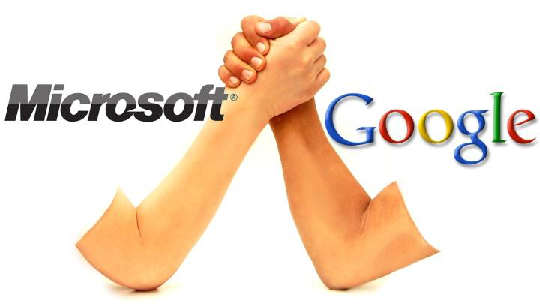 In an attempt to resolve issues together and more efficiently, Microsoft and Google came together once again to make peace by setting aside their objections regarding one another.

The statement given by the companies explains why they arrived at this conclusion, both having to iron out their disputes in legal matters. While talking to Recode the companies recorded a statement saying that the companies should be competing on products instead of focusing on legal proceedings, “Our companies compete vigorously, but we want to do so on the merits of our products, not in legal proceedings.” Microsoft seceded to aid FairSearch, crossing out their name from amongst the group of companies against Google. Hence, their feuds with Google shifting to peace and fairer competitions.

The first attempt was in the last September when the tech giants agreed to end a two-year legal battle over Android patents. However as for this new peace treaty, it was revealed two days after the European Union filed and imposed an official complaint regarding Google and Android in particular. It was said that Google was being irrational in advertising, using Android to make themselves more prominent. It’s pretty blunt for being considered ‘formal’, honestly. Regardless, Microsoft pulling itself out from amidst Google’s enemies meant the complaint would be of much less importance to Google.

“Microsoft has agreed to withdraw its regulatory complaints against Google,” as said by a representative of Microsoft. It was believed to show Microsoft’s “changing legal priorities”, to quote the representative. Microsoft clearly stated that they would keep the competition heated and on-going but only in terms of earning, rather than meddling with official and company-bound affairs.

The complaint, already being filed by this time, could have been taken into consideration at the official level, but it was disclosed that the companies had already been enforcing their plan to achieve peace since before the filing.

The reason for this negotiation could partly be from the previous dispute last September. Legal documents regarding Android were made public and it was claimed that Android was being illegally used for profit. However, these accusations were set aside after two long years of decisive disputing with Microsoft. Perhaps, this time, their former feuds lead to more reasonability and the two companies reached for a more tranquil way of competing rather than making any rash accusations about each other. It’d probably be the best hope for no further disputes, legal or not, between the two renowned companies.