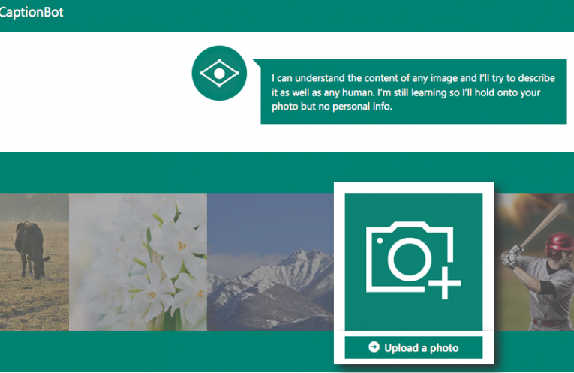 Microsoft has been working on artificial intelligence and trying to introduce intelligent bots. The latest addition to the Microsoft AI bot family is Caption Bot.

Caption Bot is an always learning online tool that takes your images as input and then analyzes them to produce captions that describe the image. Caption Bot uses Microsoft Cognitive Services which builds apps based on machine learning Artificial Intelligence. The online application uses two of the services provided by Microsoft Cognitive Services suite, Computer Vision, and Natural language.

Computer vision is used for image recognition. It has been used by many applications that Microsoft has introduced earlier such as guessing a person’s age, detecting emotions based on facial expressions, and identifying what dog breed you are based on your image. Natural Language allows the Caption Bot to speak in a manner similar to humans. Natural Language has been previously used by Microsoft when it introduced the Twitter AI Chabot Tay.

However, Microsoft does not have to worry about racist comments from Caption Bot as it will only produce captions for images based on the picture. Microsoft will, however, have to worry about the output generated by the bot. Even though, the bot has produced some very impressive results while testing; it has also generated many wrong captions. The bot produced good results for clear images but it does not work as well for abstract images.

The wrong captions are produced when the bot gets confused. Caption bot is based on machine learning so the more images you input the more accurate results you will get as output. You should also keep in mind that Microsoft will hold on to any images that you upload as they will be used in the future to generate more accurate captions.

Caption Bot is an addition to the growing group of applications that have been produced by the Microsoft Research Team. The tool, however, is not the first AI that captions images. In 2014, Google had announced algorithms that performed the same operation.

Go ahead and test the bot with your images. Don’t forget to share your results with us.