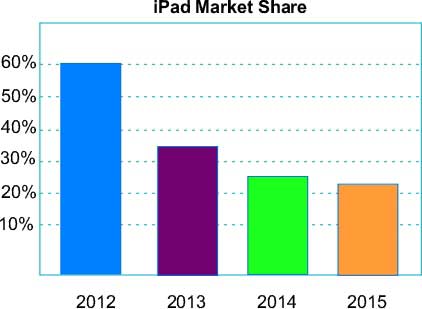 Sale of tablets around the world continues to taper off from a high achieved in 2014. This is probably because of the rise and increase in the sales of smartphones with 5 and 6-inch monitors. These phablets have the functionality of a tablet with their large screen sizes and they also combine all other features of smartphones. While it is a cause of concern for Apple that held a global market share of 27.7% in 2014, the fact is that most of the brands are losing their grip over market share in this segment that has seen rise of local players across the world.

IDC, which is the largest research firm, has released the latest sales figures of tablets made by various companies. These figures show that though it is a declining tablet market, Apple continues to dominate it, shipping around 10.9 million of its iPads across the world in the 2nd quarter of 2015. Though iPad is still the largest selling tablet in the world, its global market share has come down below 25%. This is also a reflection of the competition that Apple is receiving from low priced brands such as Lenovo, LG, Samsung, and Huawei.

Samsung, the Korean electronics giant, is at 2nd place, having shipped 7.6 million of its tablets globally in the same period. It holds a market share of 17% at present. This is one million units less than what Samsung sold in the same period in the 2nd quarter of 2014. Apart from Apple and Samsung, Lenovo, LG, and Huawei are the next top vendors of tablets around the world. The remaining vendors have a combined market share of 45.6%.